The twenty two years I lived in Alaska - most was in Anchorage. But I did spend a year in Ketchikan and Petersburg and Glennallen. Anchorage has Elmendorf AFB and Fort Richardson Army base.

I would feel so sorry for the military families that came from being stationed somewhere in Florida, Louisiana or other spots in the deep south. That first winter in Alaska was a real shock for them.

We would tell them that they were very fortunate - they could have been stationed at Eielson AFB or Fort Wainwright Army base - both of these being in Fairbanks.


For those who have never been or lived in Alaska - there are favorable comparisons in the lower 48.

Anchorage is located on Cook Inlet - its weather is very similar to Seattle but Anchorage will get a foot or so of snow in the winter.

Fairbanks is very much an interior city - its weather compares favorably with Minot, North Dakota. Except it can reach -50F in the winter and I've seen +108F in the summer.

lots of rain so far in central florida...seems like it rains everyday lately.lakeland fl reported 54 inches so far this year
Aug 5, 2018 #13

oosik said:
I can't imagine being in FL without power. I was in FL a loooooong time ago as a youngster. Only memories are oppressive humidity and it rained almost every evening. Orlando, FL. 1944-45.
Click to expand... 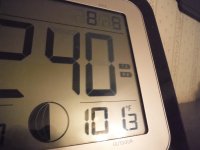 polkwrangler said:
lots of rain so far in central florida...seems like it rains everyday lately.lakeland fl reported 54 inches so far this year
Click to expand...

Not the best way to enter the worst part of hurricane season.
Lots of people are having flooding already
Aug 5, 2018 #15
S

Here was 6" of rain in one hour on my pasture!
It soaked in after another hour.