What does a runaway trailer really do?

I agree.. the hi viz smv types are easier to see.

but leaving an unsuspecting driver to crash into a rodblock around ablind curve is just unfathomable..

The trailer at least was owned by a large trucking company here, I'm not sure if it was a company driver/truck or a contracted driver.

Related to the original question,
1) Saw the results of car trailer loaded with engine blocks come unhitched at 70 mph. It broke the chains and there were engine blocks, busted pieces of exhausts and intakes and fluids all over the road for a good 1/2 mile past where the trailer stopped upside down. It look like a half dozen small blocks lost? The truck was in the ditch, I think the trailer got swaying before dumping/flipping.

2) Neighbour had a small trailer come unhitched from his old full size blazer, it had lift on the tongue from how he loaded it. The tongue came off the ball to the limit of the chains, but cyclicly jerked denting hit tailgate before hit hit hte brakes and it broke out his back window. No trailer brakes on the that one.
Sep 5, 2012 #53

Never lost the trailer but years ago I had just fully refurbished a small cargo mate trailer 52" x 52". On the first camping trip we headed out on the trans canada highway. We were about 30 miles from home when my wife turns to me all of a sudden and asks "whats that noise?":confused3: I check my driver side mirror for the trailer, every was fine except the tire was about10" to the side of the fender.:ashamed: I knocked off the cruise control and pull to the shoulder, but the tire kept going and going. It crossed the center ditch and laid down on the shoulder of the on coming lanes but without crossing them. It must have rolled on its own for nearly 2000' before coming to a rest. I guess I forgot to torque the wheel nuts.:loser:. I was able to recover the tire, but what do you do without lug nuts?? Well I stole two from the other side and headed back home. Somehow I never forgot to torque and retorque since.
Last edited: Sep 5, 2012
Sep 6, 2012 #54
R

Years ago I saw the results of when one of those small camper trailers came totally unhooked from the tow vehicle...it veered off to the right and hit a highway access delineation light standard and sheered it off just above the break-a-way base portion of the standard. It was roughly the size of this one.

Another time I saw where a heavy duty trailer with tandem axles and duals came loose from the large tandem truck towing it...the part of the vehicle that had the pintle and the safety chains attached to it, a honking big hunk of channel iron, broke off the truck and the trailer hit the ditch on a curve. The trailer had a full load of concrete culverts on it, 8 feet long and about 4 feet in diameter. Of course when it hit the ditch it dug in and flipped and the chains holding the culverts down broke. One culvert ended up about a hundred yards farther down the road than the trailer made it. If it had broke free another hundred yards farther down than it did, the culvert would have ended up in a combination roadside gasbar/restaurant.

Culverts like these and a truck with a Hiab crane on the back like this one has. Can't find a pick of a trailer like the one that crashed... 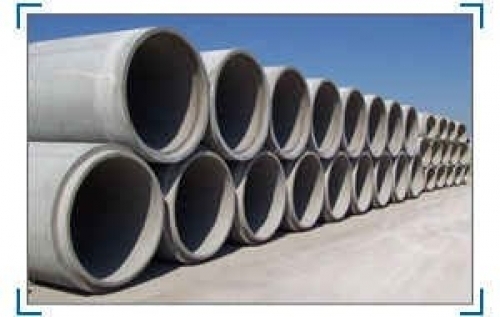 I had my little 4 x 8 motorcycle trailer come off. The trailer only weighs about 500# empty, and no brakes. The trailer receiver jumped off the ball of the hitch. Fortunately, I had only gone about a mile down the road and don't really know how far I had been dragging the empty trailer down the road.

The trailer had a spare tire mounted on the tongue and simply dropped down sliding on the spare. I did have safety chains on it and came to a slow controlled stop. Trailer did come forward a bit, but not underneath the rear bumper. No harm done other than giving me a spare with one completely flat side.

I went down to the auto parts shop the next day and bought a new ball receiver and had it welded onto the tongue of the trailer. Upon inspecting the old ball receiver, I found that it had simply worn out over the years and wasn't locking down solid.

I don't even want to think of what 'might have happened' should the safety chains given away or the trailer started fish-tailing. That certainly could have been a bad day for me and perhaps some innocent person coming down the road.
Sep 7, 2012 #57
H

I had a trailer "Lift Off" last week. Forgot to secure the hitch on the 24 foot GN flatbed. When I drove the tractor onto the rear ramp, the trailer reared up & off the GN ball. Could have broken the rear cab window but got everything halted in time. Cribbed the trailer in the raised position and backed the tractor off. I learned to block the ramps and lock the hitch in the future.
Sep 8, 2012 #58
R

Please go to Dangerous Trailers.org and take note All Hitches being used and your so called defective safety systems have NEVER been tested to a Bational Standard. See what a loose runaway boat trailer did to a Six Year old. Facebook. Prayers for Natalie. Can you afford Amillion dollars in medical bills. Every loose trailer is preventable had we have better and modern safety systems that work
Sep 8, 2012 #59

Ron Melancon said:
Please go to Dangerous Trailers.org and take note All Hitches being used and your so called defective safety systems have NEVER been tested to a Bational Standard. See what a loose runaway boat trailer did to a Six Year old. Facebook. Prayers for Natalie. Can you afford Amillion dollars in medical bills. Every loose trailer is preventable had we have better and modern safety systems that work
Click to expand...

Ron, I noted the same website about dangerous trailers in my post #22 here....thanks for bringing it up again...some of the stories there are very descriptive.
Sep 8, 2012 #60

I haven't looked at "Dangerous Trailers" recently, but when I did read it, I didn't like the implication that "homemade" was automatically dangerous.