I removed the coolant setups ( pump, tank, and feed nozzles) on my saws and sold them.

I just used a lube stick. 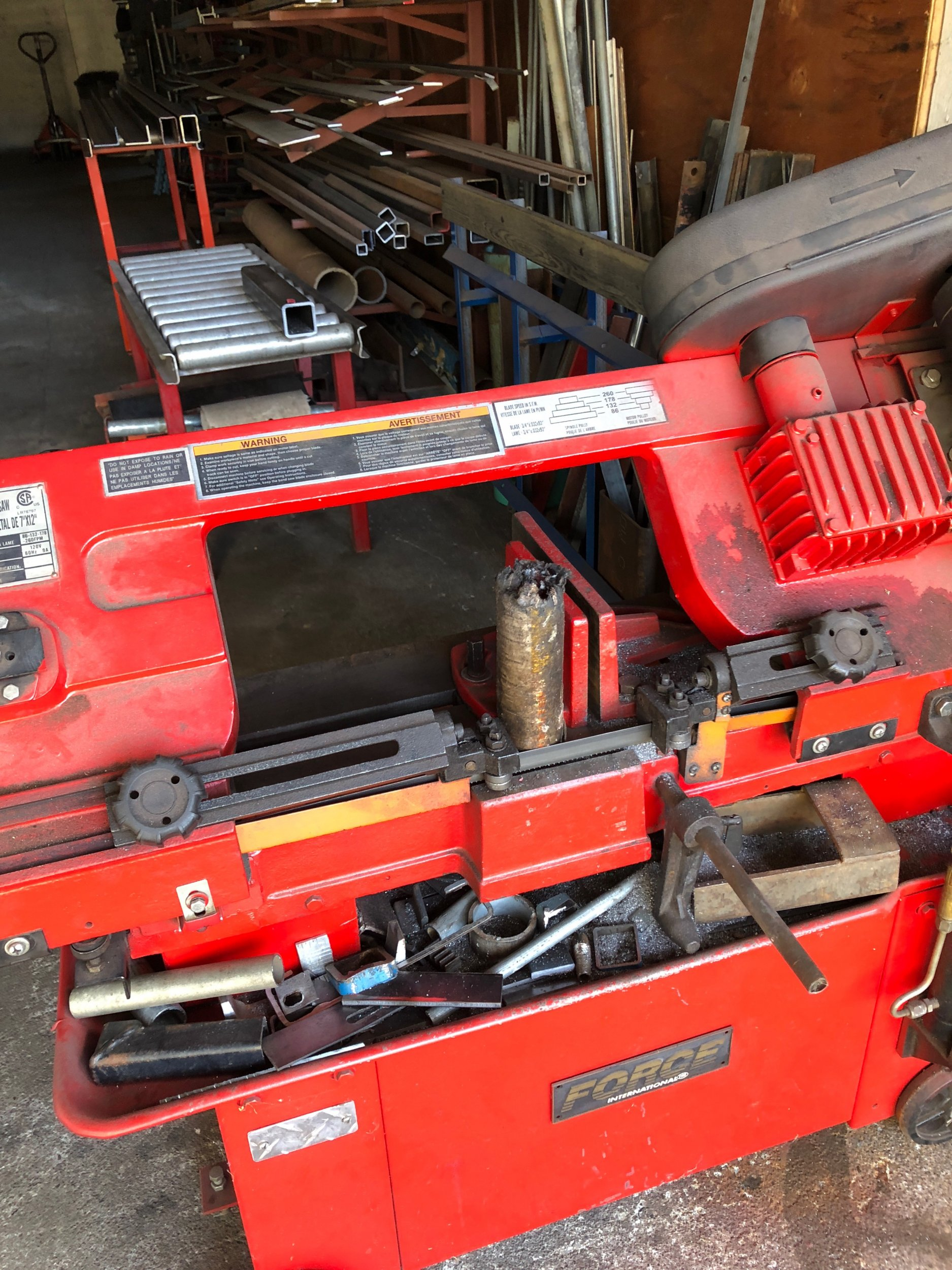 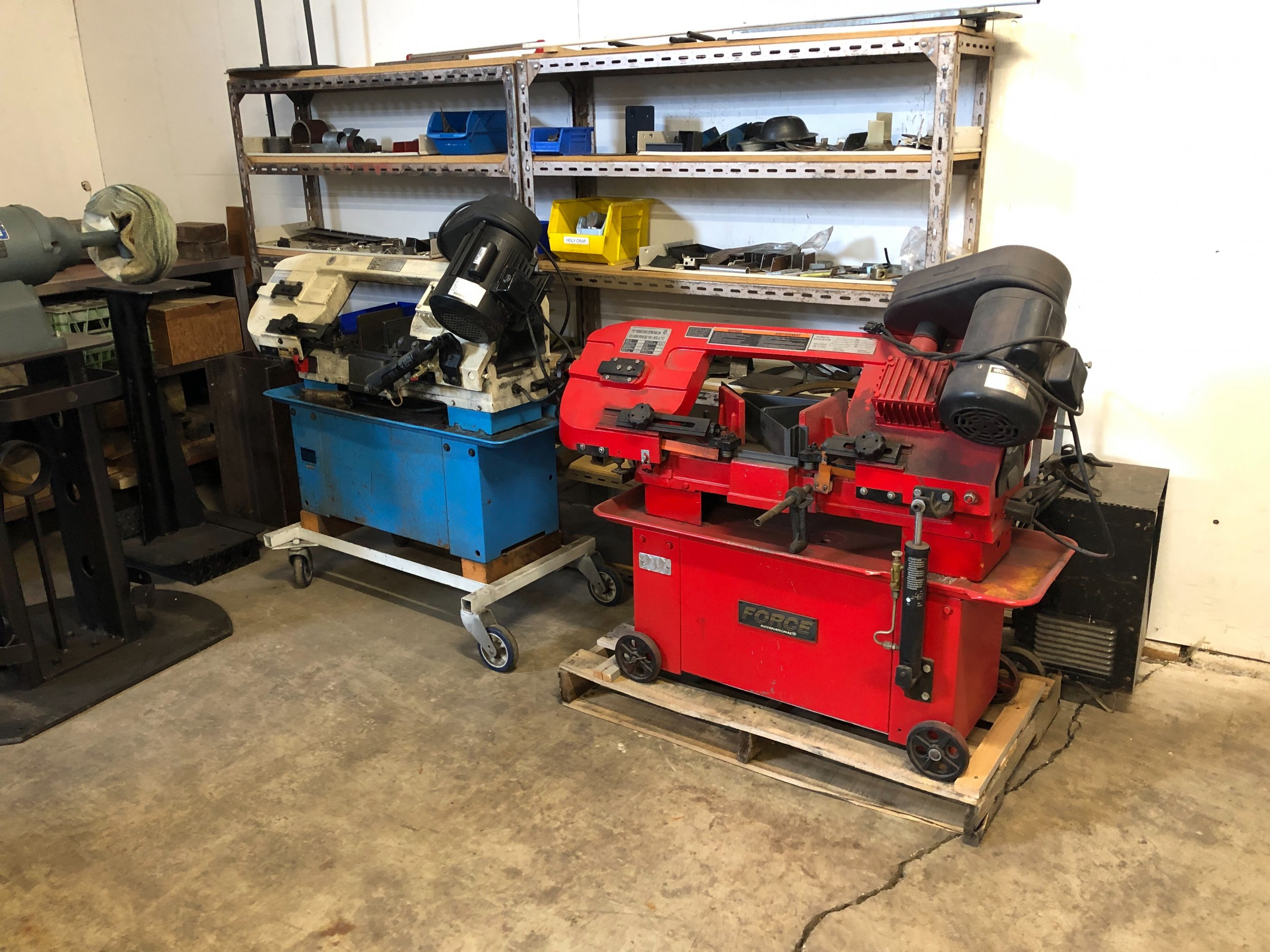 I am going back with the guy said most of this doesnt require precision
I rarely cut 45 with a saw and rarely then. I dont have to design every angle they ever invent and out of structural I rarely use tube unless I have to and even less at 45.
That is kind of an amateur type thing fostered by the internet. I built 2 or 300 benches and used 45 on one and no angle cuts for the tube which I did for legs mainly due to customer request.
My chop is set to 90 and hasn't been moved since it was set there.

I have not lubricated the band saw or used a lube stick, but it is making cuts very straight and clean. As a newb learning mostly from the internet I would love to see a list of ways things are commonly joined together since I don't have that experience. I completely agree with posters saying they rarely cut angles as you can build in a way to limit complex cuts. I am generally going for strength and functionality with minimal prep over beauty on my joining methods.

Does anyone know of a site that is fabrication basics for dummies with pictures of join options?
Aug 18, 2021 / Chop Saw Reccomendations #94
B

A simple google search should get you started -

I've found that I also get much more targeted results using google to find things on Amazon - makes Amazon's incredibly useless search engine look like it was coded by somebody who always got trophies simply for BEING there...

If you don't have an engineering degree, I recommend always testing whatever you build to at least TWICE the stress you think you'd ever need (WITHOUT being UNDER it while you do) - that way when it breaks (and it probably WILL) you're still able to fix/reinforce/start over, preferably LEARNING from your mistakes - just the welding part can take YEARS to get right; besides practice, the site

is a good place to start, but a mentor that's BTDT would probably be better. BOTH would be best, just because somebody's done something for 30 years does NOT mean they've learned the BEST way to do things, just ONE or three of the ways... Steve

Oh, other google searches to try -

BukitCase said:
I've found that I also get much more targeted results using google to find things on Amazon - makes Amazon's incredibly useless search engine look like it was coded by somebody who always got trophies simply for BEING there...
Click to expand...

Oh man, isn't that the truth. I find myself frustrated enough to click on the X most times I'm there and go to Bing. (I'm not a fan of Google--They keep trying to get into my machine.)

Weld.com and WeldingTipsAndTricks.com are the two sites that have got me going to this point. I was hoping for more of a diagram with pictures that says you are connecting Angle to Square Tube, here are the best ways and why with pictures and a rating 1-5 of prep-time and 1-5 strength type of thing. Asking too much
Aug 19, 2021 / Chop Saw Reccomendations #97
B

Or maybe trying too little - the first suggestion in my list yielded a few DOZEN links worth checking out.

Then I searched on book - which welding joints to use and why and got several MORE suggestions worth checking out. Searching the above highlighted string will get you dozens of book suggestions just from amazon, but you'd have to read thru the descriptions to see if a particular book SOUNDS like it'd help YOU. My own library (just reference) takes up 8 feet of floor to ceiling book shelves and covers pretty much everything I've EVER been interested in (a really LONG list) -

Your request sounds like a SIMPLE one, but it really isn't - my own "path of enlightenment" on just this subject happened over a span of about 56 YEARS starting with Acetylene (nearly getting KILLED by an IDIOT tended to increase my thirst for KNOWLEDGE), then a brief period with TIG (called Heli-Arc back then), then stick in 1973 (pipeliner friend's SA200), then bought a 250 amp ac/dc buzz box (still works), then got my first MIG in about 2010, second one in 2012, third one in 2015 (added a stick/TIG combo in there somewhere, had the plasma cutter since about 2011) -

BTW, the "enlightenment" won't end til they "pat me in the face with a shovel", which hopefully is still a ways away

Sorry, that got a bit longer than I expected; best of luck, and don't give up til you find something that works for you; stubbornness can be a useful tool... Steve
Aug 19, 2021 / Chop Saw Reccomendations #98

BukitCase said:
... searched on book - which welding joints to use and why and got several MORE suggestions ....
Click to expand...

Have been watching this thread for a bit and not only have to agree with the full post, but add that it's worth following links and reading things that are written with an educational value (rather than just marketing value).

For example: following the results to quoted search, and letting one thing lead to another lead me to this article: Is Welding Hard (And Can You Teach Yourself)? - Welding Headquarters

Which has a key point at the end (that I've seen elsewhere as well): "Malcolm Gladwell says in his book, Outliers, that it takes a person about 10,000 hours to master a skill. Don’t set yourself up for failure by thinking you’ll master welding in a matter of months."

....and I'd wager the phrase "master a skill" in that context doesn't mean becoming a leading expert as the latter generally takes many (many) more years, and encountering a variety of situations/circumstances/projects (20 years of experience doing a single type of project repeatedly isn't the same as 20 years where each year provides different problems on different projects to face & solve) and even then an "expert" could/will/should keep learning -- and that applies to more a lot more than just welding.
Aug 19, 2021 / Chop Saw Reccomendations #99

user.69169 said:
Average clown on couldesac just run longer and let blade rub thru. Probably got no idea blade is directional. Look at most hand hacksaws, 3" of blade wore out, rest still got factory paint on de teeth. Supposed to be dat way, don't it look good hanging on pegboard wall? Even spent time to shadow paint all his tools. Man gets paycheck for sitting in little cube and has time to moderate internet board from his device at work too. Spent a lot of time in school stuffed in hall locker when he was Hall Monitor. Switched to dat job from Crossing Guard after girls hooked his belt to flagpole rope & hauled him up.
Click to expand...

Is he still around?? I blocked him a long time ago. First and only time I’ve ever done that.