I vote for Wyze also. We bought 2 cameras about a year ago to put in my parents apartment at the assisted living home where they lived. It was under $100 for both cameras and only needed power and wifi. They have served us well and I still use them to check on mom. Dad passed away last August.

One feature I like with the Wyze (others probably have this feature too) is that I can share access to the cameras with anyone I wish. So, my 2 sisters can check in on mom at any time. Since I was the original person to set up the cameras, I'm the only one who can look back to see what has been recorded. I do use this often. Others who I give access to can only view live shots.
Feb 11, 2020 #22

Wyze is a great deal. Simple, great resolution, onboard storage and rather low bandwidth usage. Oh and the best part, about $30 bucks!
Feb 11, 2020 #23

My upload speeds vary between .6 to .9. As far as I can tell my wyzecam uploads okay. I pulled the sd card out and just use the cloud clips.

As far as security is concerned if you have a decent password on your network you should be safe. I don't aim any cameras at anything I need protected anyway.
Feb 11, 2020 #24
OP

We're at ten days or less, and my wife's getting more and more fussy in getting everything ready. Even bought new hemostats today!!!

My wife just took this picture of Kami. 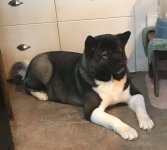 lman said:
I see that most of these units require 2 Mbit/sec upload speed. I am only able to get .75. Has anyone been able to view their camera remotely with slow dsl upload?
Click to expand...

My rural grandfathered internet is supposed to be 1 Mbit but I RARELY get that, usually it's about 0.6 Mbit.
Wyze has a feature that let's you group cams and view up to 4 cams live on 1 screen.
I've found I can reliably have 3, sometimes 4 in a group and view the group. More than 4 in one group on the rural net at a time and one will "hang". So I run them in several groups, 4 for the front, 4 for the back, others for testing, watching the sump pump etc.
My system in Virginia is on a relatively high speed net (I sometimes get 20Mbit/sec UP), I usually run all 7 cams in a group with no problem except the native app puts it on 2 screens.


mikester said:
Any camera that REQUIRES the internet to operate gets zero stars in my books. If your idea of security is leaving your keys in the door, the door wide open and your wallet on the doorstep then go for it.

I just picked up a cheap IP camera from amazon. As soon as you turn it on it tries to make at least half a dozen back door two way connections to multiple servers in mainland China that bypass your firewall. Block internet access and you cant use your camera on your local area network. I sent it back to Mao.
Click to expand...

There are plenty of expensive security cams that will fill your needs and don't require internet. Jut remember if you have a modern cell phone all that data is trackable and collectable by NSA whenever it's turned on.


EddieWalker said:
Thanks to the recommendations on here, we looked at the Wyze Cam on youtube and decided to give it a try. For $25, it seems like a worthwhile gamble to see if it works like everyone says it does. It's scheduled to be delivered Wednesday, and I'm sure my wife will have it working ten minutes after she gets home and opens the box!!!!

Well - -since you bought it -here's a few random pointers
Get a good 32MB SD card, I use Samsung
Time lapse - kind of weird - It's limited to about a month. So for example I like time lapse. I can run a time lapse with SD quality scenes taken once every 3 seconds for 12 hours and it creates about a 1GB file, no problem. That's about 15,000 scenes. But I can't run 15,000 scenes taking 1 frame an hour to document seasonal change. There also seems to be about a 2GB limit on file size.
They come out with frequent updates and new features, that may require loading new firmware or a new app. DON'T automatically load the new stuff. I'm a Beta tester for both hardware and software. I've spent countless hours reloading working versions. Often they break some minor (to them) feature in an upgrade. They seem to be a relatively small firm and rely heavily on us beta testers. But they treat us like clowder of cats.
If you want to run a camera "outside" they are pretty hardy. I've posted here about using them as backup cams and FEL cams and I can run them off my phone as a hotspot..

lman said:
I finally found the specs for the Wyze Cam on their site, indicating that it requires a minimum 1.0 Mbps upload. They sure make it hard to find that spec. I guess I'm a little too far out in the sticks and don't have internet that fast so I'll have to pass unless somebody else has been able to use it with ADSL. I'm afraid it would hog all of my upload and screw up my network. Maybe in about a hundred years faster internet will be available for me.
Click to expand...

Like I wrote, you can probably run several, just keep an eye on them. One time they did an upgrade to the Beta and all of a sudden it defaulted to my cell phone data plan and I used something like 200Mb in a few hours. We caught it in Beta and they fixed it.

EddieWalker said:
Thanks, I've been working on the whelping pen, or nesting box, for awhile now. I should be done this weekend, which is cutting it close.

I vote for Wyze also, My bride and I are enjoying a short break in a warm climate and I can watch my driveway, home and shed. Good point earlier about the sump pump, not a lot of concern this time of year for me though. I have a few, indoor models are in the outdoors and have worked flawlessly, they are well protected from the elements. I order direct from Wyze and they are $19.95, I buy their sd cards as well, I don’t recall the brand.
I also have Canary brand, they work well but are $60.00. Bottom line, I have some peace of mind while away.
Feb 12, 2020 #28
OP

BoylermanCT said:
She is a Schipperke.
Click to expand...

I had to google the breed. Thanks, I love learning about other breeds. Guess that's why we enjoyed watching Westminster the last three days!!!!
Feb 12, 2020 #29

EddieWalker said:
Thanks to the recommendations on here, we looked at the Wyze Cam on youtube and decided to give it a try. For $25, it seems like a worthwhile gamble to see if it works like everyone says it does. It's scheduled to be delivered Wednesday, and I'm sure my wife will have it working ten minutes after she gets home and opens the box!!!!

Keep in mind you are recording video inside your home that will be pushed out to the internet. Some are OK with that, some not.
Feb 12, 2020 #30

EddieWalker said:
Thanks to the recommendations on here, we looked at the Wyze Cam on youtube and decided to give it a try. For $25, it seems like a worthwhile gamble to see if it works like everyone says it does. It's scheduled to be delivered Wednesday, and I'm sure my wife will have it working ten minutes after she gets home and opens the box!!!!