DerbyRunner said:
Keep in mind you are recording video inside your home that will be pushed out to the internet. Some are OK with that, some not.
Click to expand...

We love putting everything out on the interenet. Kind of why I'm on TBN and FB.

Everything we video will end up on Facebook!!!! The more people that know about the puppies, the more interest there is in them, the more choices we will have in finding them the best home possible.

I'm making the whelping box as fancy as I can so everyone that sees our video and pictures understands that we will do everything and anything for our dogs.

If there isn't a line of people wanting to pay us thousands of dollars for each puppy, that means we haven't posted enough pictures and videos!!!!
Feb 12, 2020 #32

Eddie I hope you can share your experience with the cameras

Can you link the video of the pups here

DerbyRunner said:
Keep in mind you are recording video inside your home that will be pushed out to the internet. Some are OK with that, some not.
Click to expand...

EddieWalker said:
I had to google the breed. Thanks, I love learning about other breeds. Guess that's why we enjoyed watching Westminster the last three days!!!!
Click to expand...

We also watched the Westminster Dog Show. Finest looking dogs on the planet. I was hoping to see one of your Okita's there. Maybe soon?

I've owned probably every "dangerous" dog on the list, in the past. Now we've evolved to small terriers. Not sure I could control an Okita these days, but they sure are beautiful animals. Keep up the good work.
Feb 15, 2020 #35

kcflhrc said:
Did you see the Equifax Data Breach thread? Pretty sure Puppy Video's are low on the hacker's list.
Click to expand...

The risk is low, but that does not mean it is not there.

When his wife handles the puppies on video, will she have a diamond wedding ring on? Hmmm. In the background, might there be a set of valuable cut glass pieces, or a rifle leaned up in the corner?

A famous scam was when people were wanting to sell guns, or buy accessories for them, or other valuables. They took a photo of the gun, or part, or item using their camera phone, then uploaded that to Craigslist for their ad. What they didn't realize is the photo included the embedded GPS coordinates where the photo was taken-- courtesy of the "location" feature in many phones.

Criminals would then target the house or area where the photo was taken. Using Google Earth, they could even see aerial imagery to plan their entry and exit.

So, is all of this overly paranoid? Or merely a caution to be careful. As I first wrote, some are comfortable with video from their homes being pushed out to the public Internet, and some are not.
Feb 15, 2020 #36
OP

Gem99ultra said:
We also watched the Westminster Dog Show. Finest looking dogs on the planet. I was hoping to see one of your Okita's there. Maybe soon?

I've owned probably every "dangerous" dog on the list, in the past. Now we've evolved to small terriers. Not sure I could control an Okita these days, but they sure are beautiful animals. Keep up the good work.
Click to expand...

There where only 4 Akita's at Westminster this year, which was noticeably low. Billy Jean won breed, and she was the only female there. We've never competed against her, and she is the number one ranked female Akita in the country. We're number 3 female. I'm not sure if we could beat her or not, but I'm know that we can beat the other three that where there since we have in the past. Currently our boy is ranked number 9 in the country and our girl is was number 12 when she last showed.

The top five in every breed get invited to Westminster. Then if you are a Champion, you can enter if you want. One day we'll go, we would prefer to be invited, but to become a top five dog, you have to compete almost every weekend to get more points then anybody else. We try to get one of our dogs to a show once a month, but that doesn't always happen. We usually win Best of Breed with either of our dogs, and we only go to the bigger shows. It's super easy to win Best of Breed at a small show, but some of those shows don't even give you one point, most are just a single point. We want to win 4 or 5 points in a show, which means there has to be a lot of Champions to compete against. Everyone has their own philosophy on how to show, ours is to win big, or not bother.

I posted this on FB for our Akita friends to see. 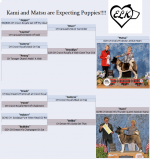 We went to the Repro Vet in Nacogdoches the other day for xrays of the puppies. He counted 7. Since there are so many, we are going to do a C Section so there isn't any risk of losing a puppy. A huge concern for us is if one or two get stuck inside and she is too tired to push them out, or just isn't able to. Then we have to do an emergency C Section, which means loader her and the puppies up, taking all of them to the Emergency Vet Hospital, which is half an hour away, or going all the way to the Repro Vet, which is over an hour away. Then take the risk that the surgery is successful, and the uterus isn't damaged. It's very common for these emergency surgeries to result in making her sterile and never able to have puppies again.

We will find out Monday when he wants to do the C Section.

Since the camera works so well, we bought another, and will probably buy two more when the puppies get here.

Thank you for everyone that recommended the WYZE Cam, it's proven to be better then we had hope for at a very reasonable price!!!
Feb 15, 2020 #37

EddieWalker said:
I posted this on FB for our Akita friends to see.

I am looking for a security camera. One requirement for me is that the camera does NOT upload to a cloud somewhere. Anybody have any suggestions? I was told with the WYZE cameras, uploading to the cloud was a requirement in order to have access to the images on your phone.
You must log in or register to reply here.
Share:
Facebook Twitter Reddit Pinterest Tumblr WhatsApp Email Share Link