Does anyone use a tow behind mower with their ATV or UTV? I am looking into the Encore Tracer 72" rear discharge tow behind finish cut mower to use with a Polaris Ranger to mow a few acres of lawn. I'm curious what is your overall opinion of tow behind mowers? 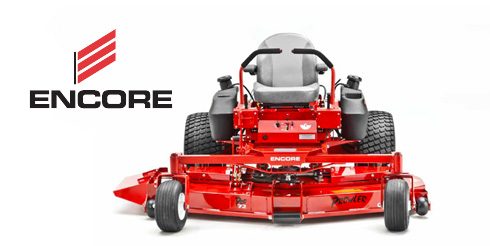 I had a Agri-fab tow behind 48 inch brush hog. It was wonderful. I could take it into the trails easy - places I’d never take the tractor.

It was a pull start and after a few years the pull start assembly started falling apart. I kept fixing and it’d fall apart again. Finally got a new assembly and it did great.

After around 8 years it was getting a little worse for wear. Tires wouldn’t hold air. Oil leaks.

Gave it to a neighbor who is much more handy than me. He still uses it.

I don’t know the brand you are looking at - but the idea is great.

I tow a 44" mower behind my two-wheel tractor that has a 34" mower on it, the rear mower slightly offset so that together I get about 74" of cut when traveling in a straight line. It works great, other than having a different quality of cut from the two, which I don't mind at all. That 44" is a 'Swisher' and it's decent, though not exceptional.

The whole reason I am here on this forum is because I need to find info about an ATV to tow that 44" mower during times I need to cut but don't want the wheels of the tractor digging into soft ground, or when I'm just lazy and don't want to change attachments. I was considering just buying a riding lawn mower, but I think the ATV would be better in terms of PSI for ground contact, and obviously have a whole lot of other (fun) uses.

But, back to something more closely related your question: Consider the possibility of a smaller mower to fit in tight spots with your ATV as MoKelly describes and also the possibility of pulling it offset behind another mower when you just need to mow. I have also (I will sheepishly admit) towed that same 44" mower behind a Volvo 240 at one point.
Last edited: Apr 9, 2021
Apr 9, 2021 #5
C

I must buy something this spring. I will have about 5-6 acres of "lawn", ultimately fairly smooth.

I've gone from considering pulling gangs to a zturn and now people have me looking at powered finish mowers.

I have a kubota 1140 so i can pull just about anything.

At this point, the commercial Swisher with the kawi engine is in the lead.

Anyone have any other suggestions.

BTW.......I swore off briggs engines 40 years ago and never looked back. Growing up, 20% of my neighbors worked at briggs. IMHO they are responsible for more heart attacks than smoking!
Apr 10, 2021 #7
F

I've been generally happy with my Swisher, with one exception. Here is my mower:

The two areas to either side of the engine sit above the deck and house the pulley system that engages and disengages the blade. For whatever reason, these two areas fill up with mowing debris pretty quickly, to the extent I feel compelled to take the plates off and blow them out every 10 acres or so. It's not too big a deal, but I am irritated by it, as it seems too frequent a form of maintenance. Just yesterday I fired the mower up for the first time of the season then opened the compartments up to empty them afterwards, only to learn that I had never cleaned them out last season. Over winter, a family of mice had set up house in the debris and somehow survived 5 acres of mowing. My daughter and I chased them off and it was good fun. But again it seems too often for me to have to clear out these compartments, even thought they only require two screws each to remove.

I have never used another pull behind so I don't know if this is common, but the Swisher pro models look like they might share this design element. They may be better engineered and less inclined to collect debris, but it's worth discussing with the dealer (etc) to be sure you will be happy with the maintenance requirements.
Apr 10, 2021 #8
O

Dynasty said:
Does anyone use a tow behind mower with their ATV or UTV? I am looking into the Encore Tracer 72" rear discharge tow behind finish cut mower to use with a Polaris Ranger to mow a few acres of lawn. I'm curious what is your overall opinion of tow behind mowers?
Click to expand...

I bought a "push in front" mower years ago, but there were a few drawbacks, and the factory was able to sell me a conversion kit to make it a "tow behind" mower.

It has three cutting discs, for a total cutting width of five feet (60"). The original engine was a Kohler 16hp, but that proved to be a little underpowered, and I replaced it with a Kohler 22hp 2 cylinder - much better.

The dealer demo'ing the mower when he delivered it:

After conversion to a tow-behind:

We initially bought it to mow the grassed areas in our olive grove, which covers about 5 acres. I wanted to avoid soil compaction as much as possible, otherwise I would have simply used the tractor and 6 foot slasher (rotary cutter).

The drawback with the original push mode was that the operator on the quad bike got the fumes and clippings/dust, and it was almost impossible to change direction on even a slight slope. This was because with the mower fixed to the front of the bike, the whole structure became, in effect, a six wheeler with the steering wheels in the middle of the string! The factory must have anticipated that some owners would want the tow-behind version, as they already had the two lugs on the front to accept the drawbar.

I mostly use it in offset mode, to better mow under the olive tree canopies. The finished mowed area is very smooth.

And what became of the original Kohler? We looked around for a rider mower with a worn out engine going cheap, and thus was born "The Red Devil". The Kohler replaced a 12hp Briggs & Stratton, but the engine cover would no longer fit: