Good morning! 71˚F heading to the mid 90s, no rain in sight, the irrigation system watered the yard last night.

After I found all the water valves and turn one off and then back on again, when I was working on the shower leak, I had a strange water bill - Just the basic fee - no water usage for the month. I called them and my meter was not reporting usage, but my meter was still turning and was reading 10,000 gallons more than their last report. I asked them if I broke something by turning the valve and they assured me I did not, their automatic reporting meters go bad and stop reporting ever so often. They said to expect my next bill to be double. I did have to go over exactly how they recover the lost gallons because they have three different increasing rate structures depending on usage, they assured me the gallons will go on the first (lowest) rate tier.

Had to make a quick run to the store for hot dogs this morning. I had to hide Whipper pills in pieces. Dogs with Cushing's can live for 3 years. She ate her food and hot dogs this morning (after not eating for two days) and my wife is walking her now. Yesterday during the walk Whipper stoped and I had to take the truck to pick her up.
Jun 17, 2021 #134,472

Good Morning!!!! 73F @ 5:30AM. Sunny. Record high temperatures expected. High near 108F. Winds W at 5 to 10 mph.
An Excessive Heat Warning is in effect through Saturday night. Friday looks to be the worst of it, with a forecast high of 109F. Fortunately lows will be in the mid to low 70s, so I won't be having to run the A/C all night.

Beautiful red on that Mustang, Doug. Looks like a ten grand paint job. I'd love to hear you rap on the pipes in a video...

Hope the vet can get Whipper straightened out without surgery, Don. 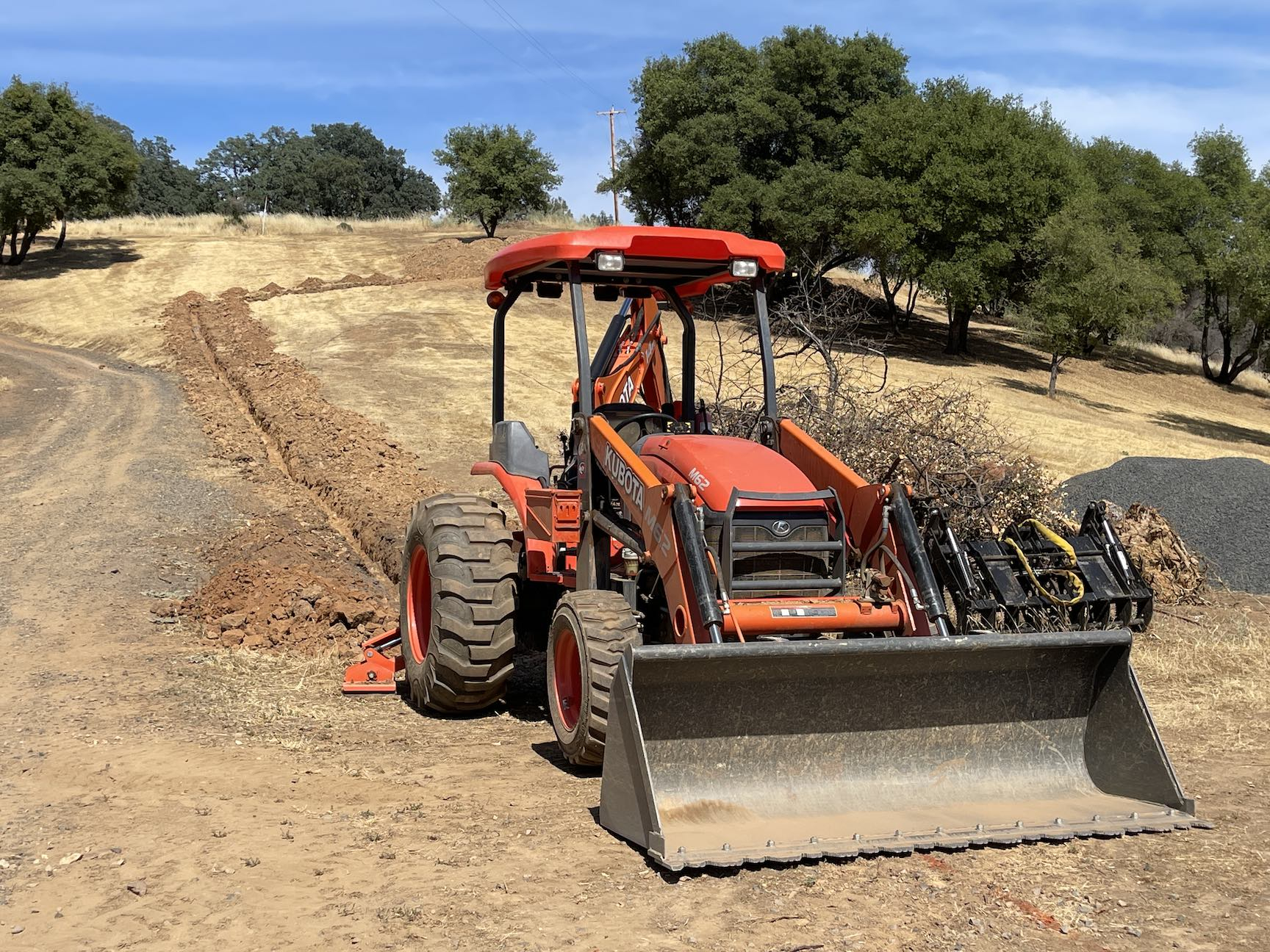 Made some pretty good progress yesterday. Got through the rock bench I finished up in the day before by digging the bucket teeth in then booming up, splitting the shale along the laminations. Slow going, but it was only a few feet, then mostly loose rocks, and then dirt. The slope also decreased to the point I felt comfortable leaving the brakes off so I could move the tractor forward with the dipper stick. By the time the afternoon heat rolled in, the roof was providing pretty good shade and there was a little breeze, so I kept going until about 6PM when the hour meter told me it was time to get the grease gun out again. That finished festivities for the day.

The ol' back was complaining when I came in for lunch, so I took a couple ibuprofen with my sandwich. It made a pleasant difference, but I was reminded that it's important to read the label carefully in order to achieve the expected result. 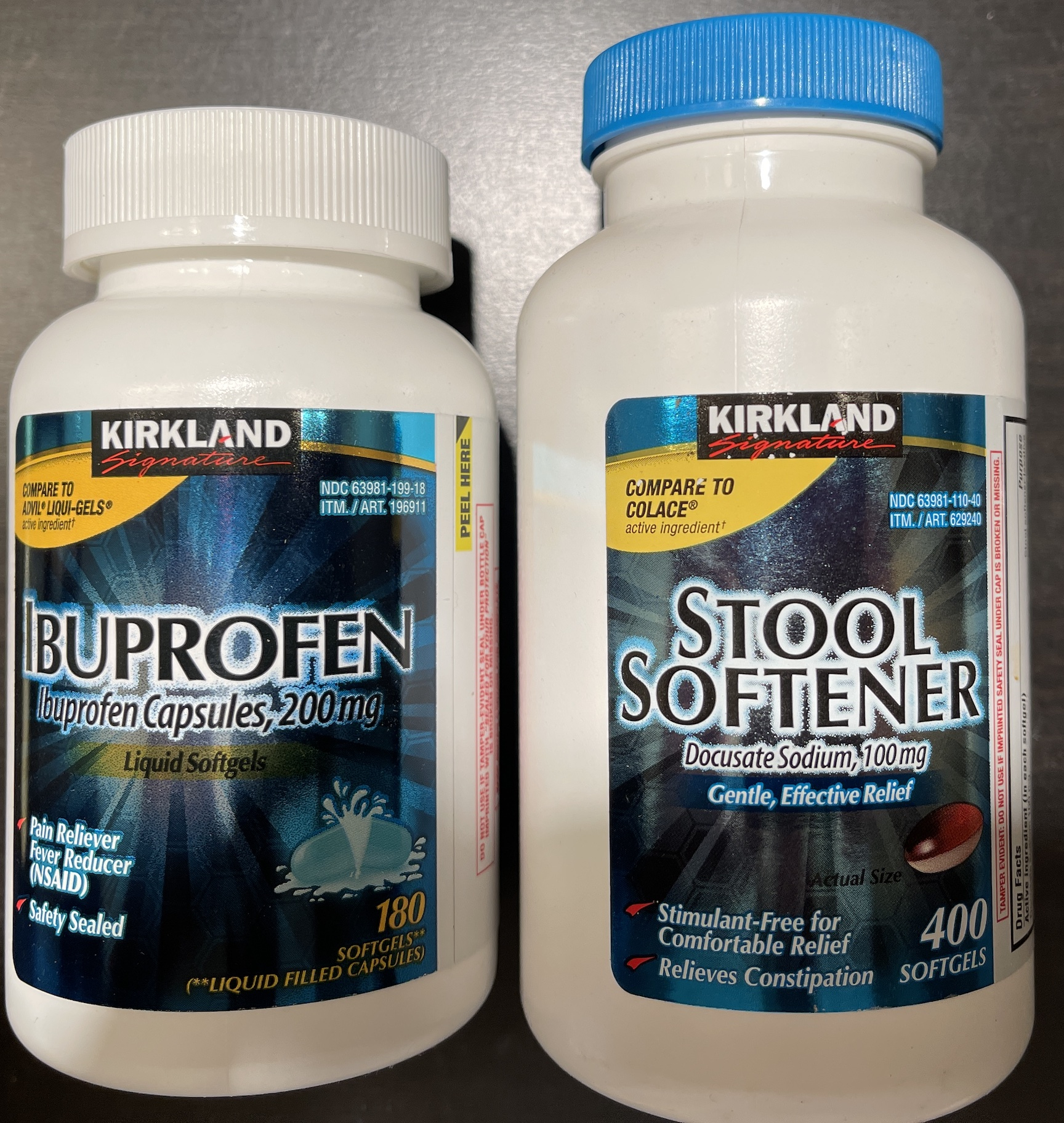 A margarita and a couple cycles through the outside shower/drying in the sun sure felt good at the end of the day. Today looks like a repeat.

RNG just imagine what the blind have to deal with...

successful trip downtown, got stainless steel wingnuts to replace the pot metal ones we broke
getting the JD mulching kit off. I don't think they will ever use that mulch kit again but I'm returning it to owners
in better shape than I got it. Picked up a quart of exterior white trim paint to do some first floor windows later today in the sunshine.
Though not sure I have the right paint brush I need.

Then went foodshopping at the fancy supermarket next door. Was unable to leave without a home made looking lattice cherry pie, looked like what the Amish made.
After everything was put away, I rewarded myself with a nice slice of that pie. Lots of fruit, little gelatin and nice dough. Quality calories.
Jun 17, 2021 #134,474

63°F and clear skies this morning, going up to 97° today. We're looking at 102° for tomorrow. Summer is still ignoring the calendar here. On my iPhone weather widget, I keep a place for the weather in Death Valley CA and International Falls MN, which helps to put things into perspective in Summer and Winter. Yesterday it was 129° in Death Valley (which is not a record, I've heard).

Took the line trimmer for a short walk after work yesterday, then got out the push trimmer to get some of the hardier stuff around the burn pile. Wife had been having some trouble getting the cap off of her Echo trimmer to replace the line. I got it open with a little prying help from a large screw driver, and found the line had been pinched between the release tab and the spool, preventing the tab from being fully depressed ... a remnant of her nephew using/abusing it when he stayed with us. She doesn't like using my heavier Husqvarna trimmer, so she's happy to have hers in working condition once again.

MoKelly, I can't call myself a "bike nut," but I've always loved to ride. One thing I've long wanted to do was ride the Katy Trail across Missouri from St. Charles to Kansas City. Wife and I were discussing the possibility a couple of weeks ago. Not convinced we'll actually do it, but I was surprised by her interest in it, as she's never been as interested in cycling as I am.

Good luck with the audit, Roy. Assuming since it's only one day that this is just a surveillance audit and not recertification.

Congrats on the new car, Doug. I lost interest in the looks of the Mustangs for a long time, but these newer models look pretty mean.

Eric, my youngest stepson used to watch Top Gear fairly religiously when he still lived with us. I always found Jeremy Clarkson to be very entertaining. I suspect his farm version will be equally entertaining, and informative.
Jun 17, 2021 #134,475

It was late at night when a pilot boat approached a French frigate 10 miles off Sandy Hook, New Jersey. Soon, a voice pierced the silence, asking, "What ship?" The response, in a heavy French accent, came swiftly: "Isère, from Rouen." The pilot jumped in a dinghy and approached the vessel. "It’s all right," he reported back, "she’s got that big Liberty on board." Neatly packed up in more than 200 separate boxes, the Statue of Liberty was finally home.

The story of "Liberty Enlightening the World" (as the statue was originally called) actually begins two decades earlier. French anti-slavery activist Édouard de Laboulaye, moved by America’s abolition of slavery, wanted to create a monument in celebration of the nation’s upcoming centennial and its close relationship with France. After years and years of delays, Laboulaye’s 305-foot copper-plated tribute, designed by French sculptor Frédéric Bartholdi and based on the Roman goddess Libertas, finally made the transatlantic trip. Two days after its arrival, amid blasting artillery and 20,000 jubilant New Yorkers, the Isère dropped anchor at Bedloe Island, today called Liberty Island — the new home for America’s greatest symbol of freedom."
Jun 17, 2021 #134,476

PJSprog said:
MoKelly, I can't call myself a "bike nut," but I've always loved to ride. One thing I've long wanted to do was ride the Katy Trail across Missouri from St. Charles to Kansas City. Wife and I were discussing the possibility a couple of weeks ago. Not convinced we'll actually do it, but I was surprised by her interest in it, as she's never been as interested in cycling as I am.

That sounds like fun. Would ride it with you if I could. I found out some of my relatives in Sedalia MO are buried at a little country church along that trail. I should try to contact some of them that I think still live there.
Last edited: Jun 17, 2021
Jun 17, 2021 #134,477

Morning all, a bit chilly at 54 when we got up to go do our morning bridge walk.
Dog love to lunge at animals when she is sure they are running away from her

Got three plants replanted and sprayed all the Stiltgrass to stop it from growing and taking over the yard and gardens again. Stuff is nasty and grows right through bushes and ornamental grass etc.

TXDon - sorry to hear about whipper, is the medicine helping?
Roy - good luck on the audit
Alien - congrats on the car- really nice!
Phil - good news on diet !
I need to get some free time to bike again. Used to do 75 mile trips all the time.

Stay safe and be well 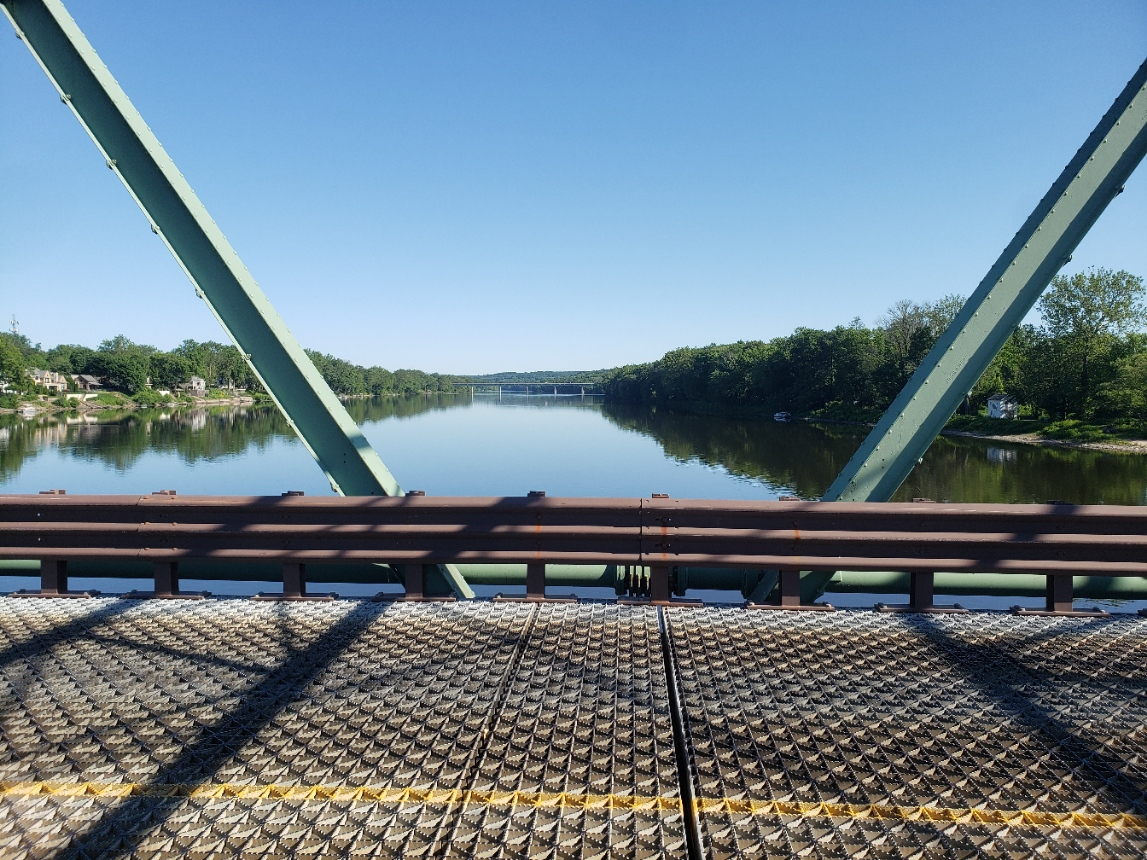 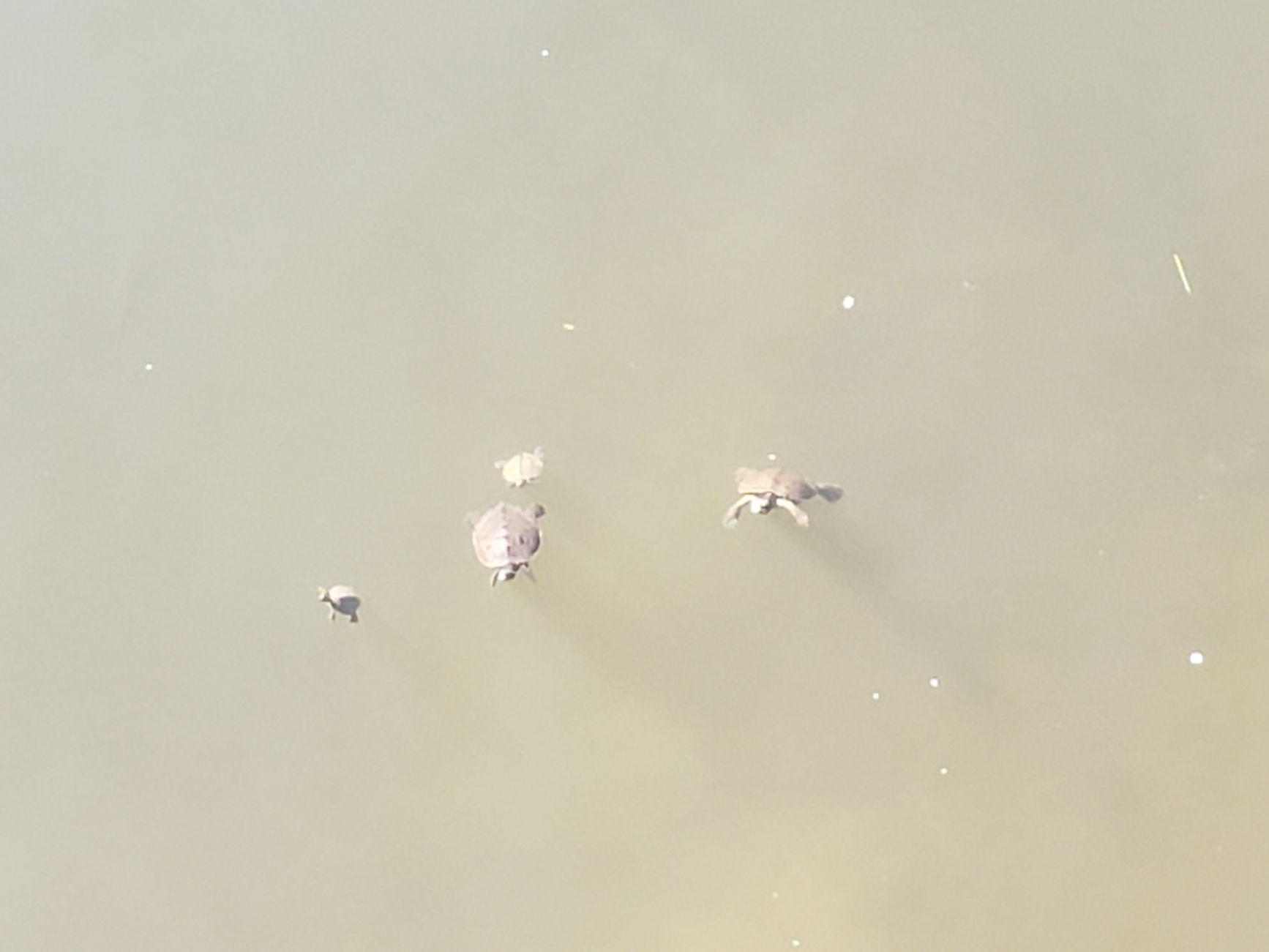 Ken, great pics. I want to do the same thing a few bridges North at Lumberville.
Friend came over and I sent her home with snowpeas and beets. We were buzzed constantly by
cicadas, and since I live near the woods, the background buzz is now even louder.
C'mon guys find your girl friend and be quiet.

headed out in a little bit to paint the exterior trim of some first floor windows. Turns out I had just the
right brush in the garage. First to change clothes, not going to wreck what I have on now, which I will surely do.
Jun 17, 2021 #134,479

Turtle Soup?
I'd get my turtle soup from a local pond and not the Delaware Ken. Or even better, the Chesapeake Bay.
Delaware River bottom is loaded with pcbs from upriver manufacturing and paper plants. Fish and Game say
maximum allowable frequency per month of eating any fish from the Delaware. One. Uno. That has to tell you something...

My fishing career started and ended in the canal next to the River catching tiny fish and throwing them back.
When the fish weren't biting it was pretty boring.
Jun 17, 2021 #134,480