64 high of 84 today storm came thru yesterday afternoon .5 in of rain 20 minutes got soaked

good morning all
lower temps and rain for Texas, good news.
not here, cool 59 out now going up to 92 in sun.

have PT on my neck this morning, then hope to borrow my brother's TR6 and take it to old friend who used to own one
in high school and we'll go for a ride. Basically screwing around on a nice summer day.

last time I borrowed one of my brother's old cars I blew out the synchro in second gear on an MGTD. Will be very careful today, with 110hp, we
aren't going anywhere fast. Quite a switch from his 600hp BMW.
What my brother found out early on is that too much horsepower is just useless in suburbia. Most of our roads are 35 and 45 here.
He has had several Corvette Z06's including a 650hp one that scared him to drive, back end would light up instantly. More fun to wind out a willing smaller
engine than wondering about when you are going to lose traction and maybe control from way more hp than one needs.

of course my life time motto is I always needed 20 pounds less and 20 more hp....
hope you all have a great Friday.

Toppop, hang in there and c'mon back

Good Morning.
It’s 58 and going to the upper 80’s another day without any much needed rain.

Yesterday started at the airport working on the biplane, the problem with inspecting something is that you inevitably find things to fix. This tab on the exhaust is one such example. 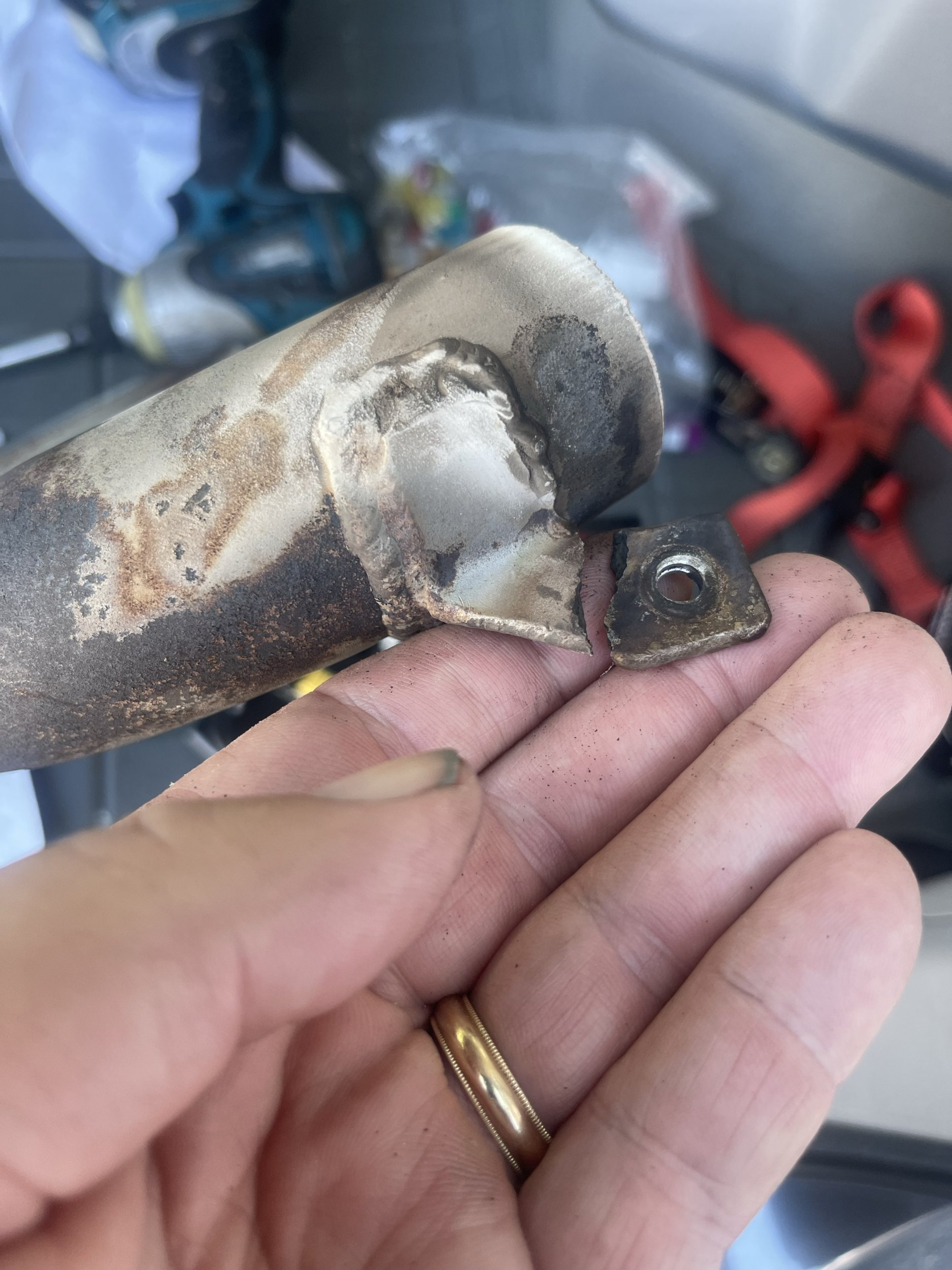 Fortunately, it just meant a trip home to TIG weld it, as it is made of stainless. Got all fixed up in time to go to the Grange Fair. 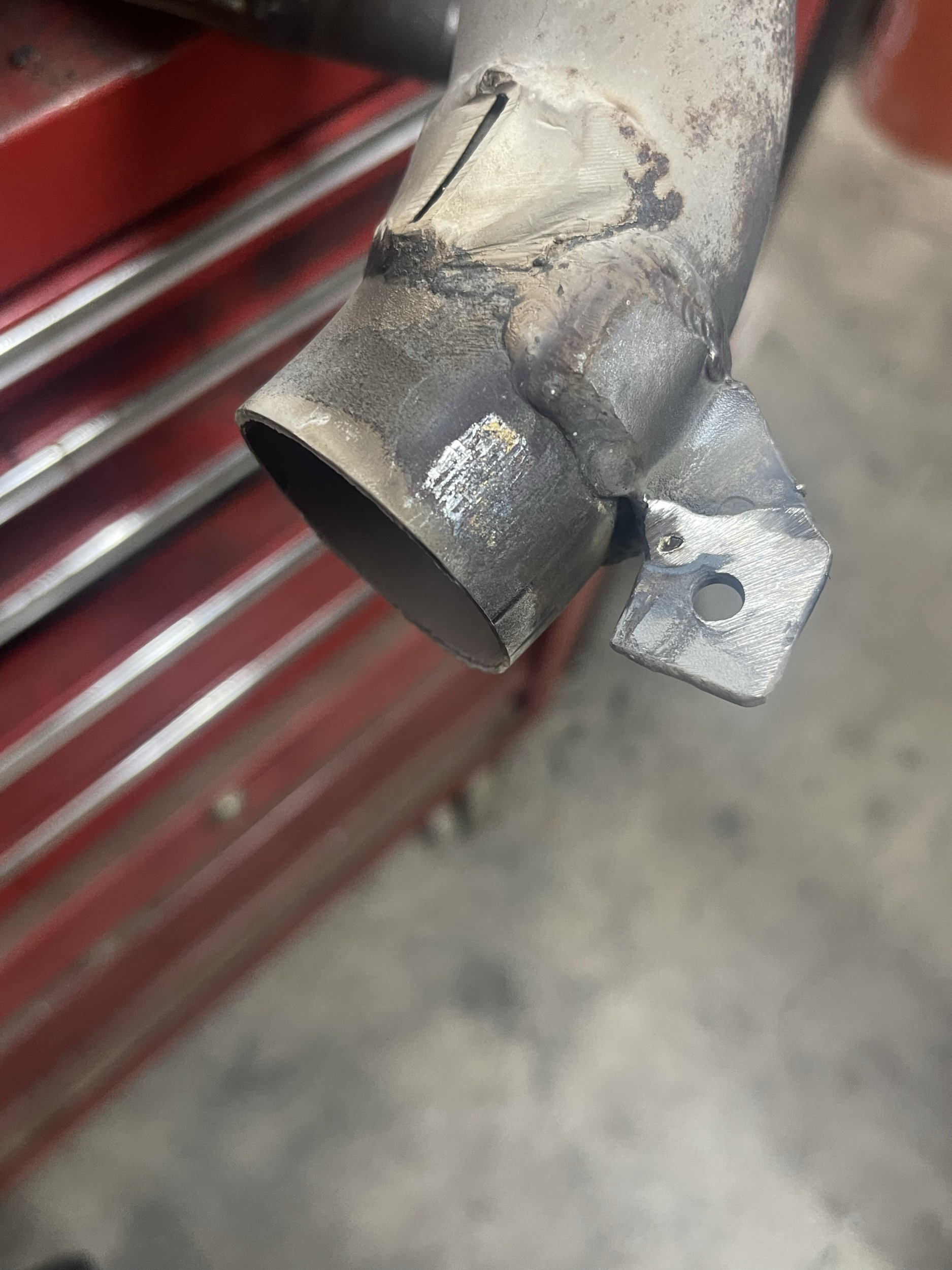 My Wife rode to the fair with DIL and grandson, I went a bit later with a neighbor that has a vineyard, and grows pumpkins and Christmas trees. Once we got there, grandson and I toured the grounds. I was disappointed that there were no hit and miss engines this year, but there was a lot more old tractors displayed.
Grandson had a great time, surprised the folks manning the Kubota display when he scampered up into the cab of an L6060 like “his”. It’s a big climb for him, he’s only 2 years old but a bruiser for his age. Here he is on a BX23. 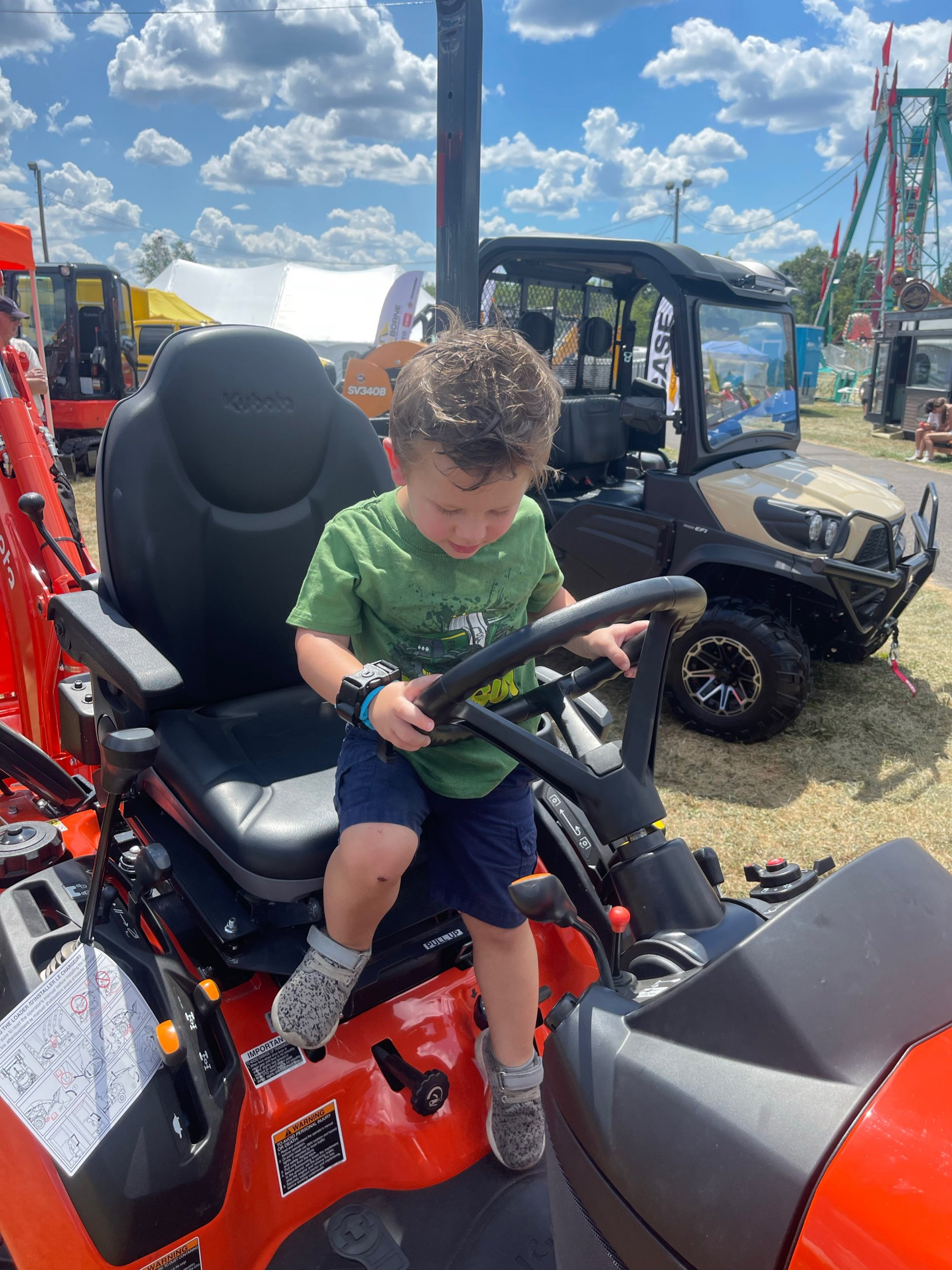 Apparently, I got to fair at the same time Drew left, so we never saw him. After we got home it was off to Costco to get a whole packer brisket to go into the smoker tonight for tomorrow’s dinner. Also got a block of 3 year aged cheddar, its pretty tasty. Last chore of the day was to get the trash and recycling toters to the street.
They were heavy enough to use the “lifter” made from scrap bits in the shop. 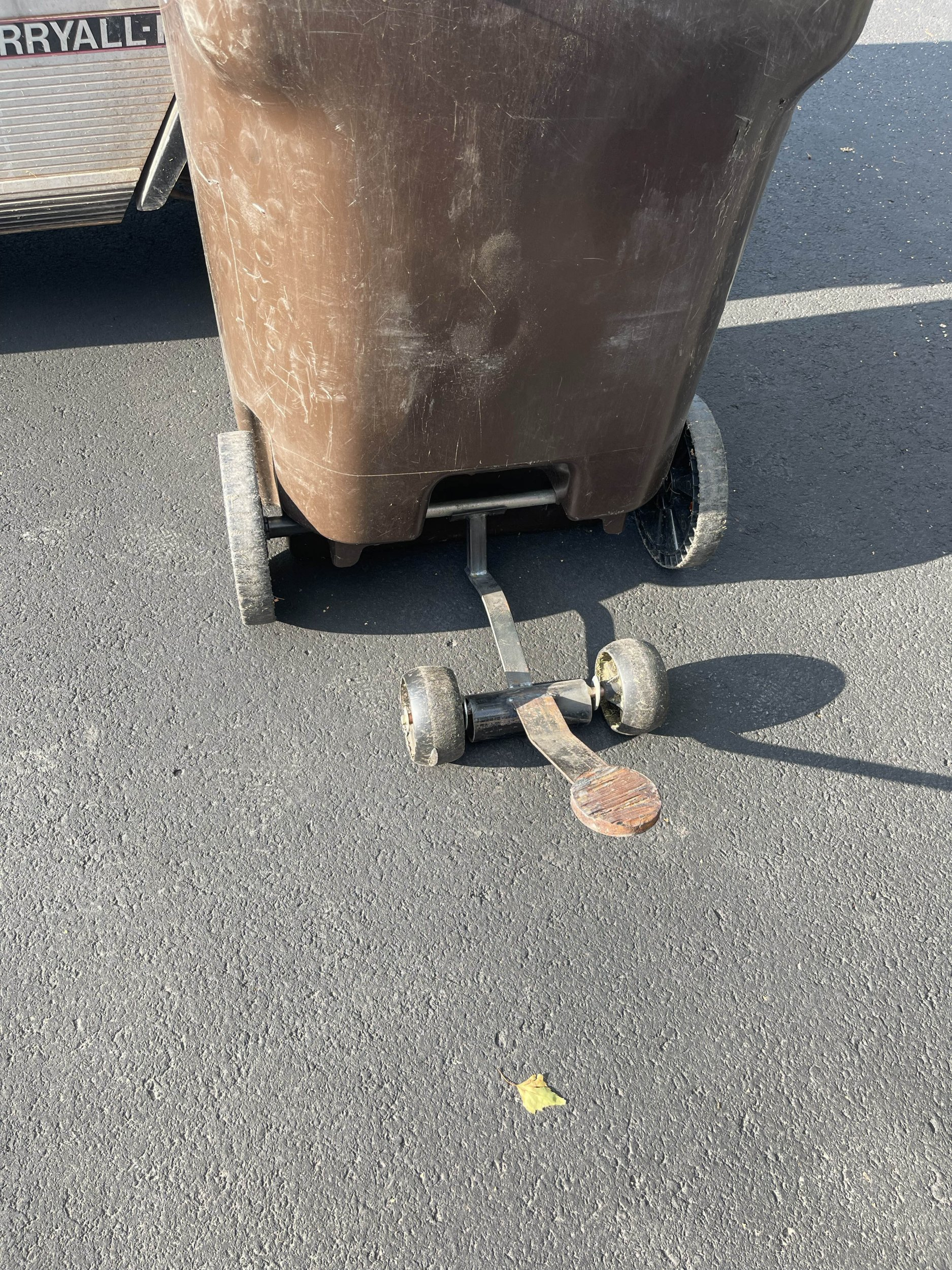 It makes it really easy to hook them onto the Carryall for the ride to the end of the lane. 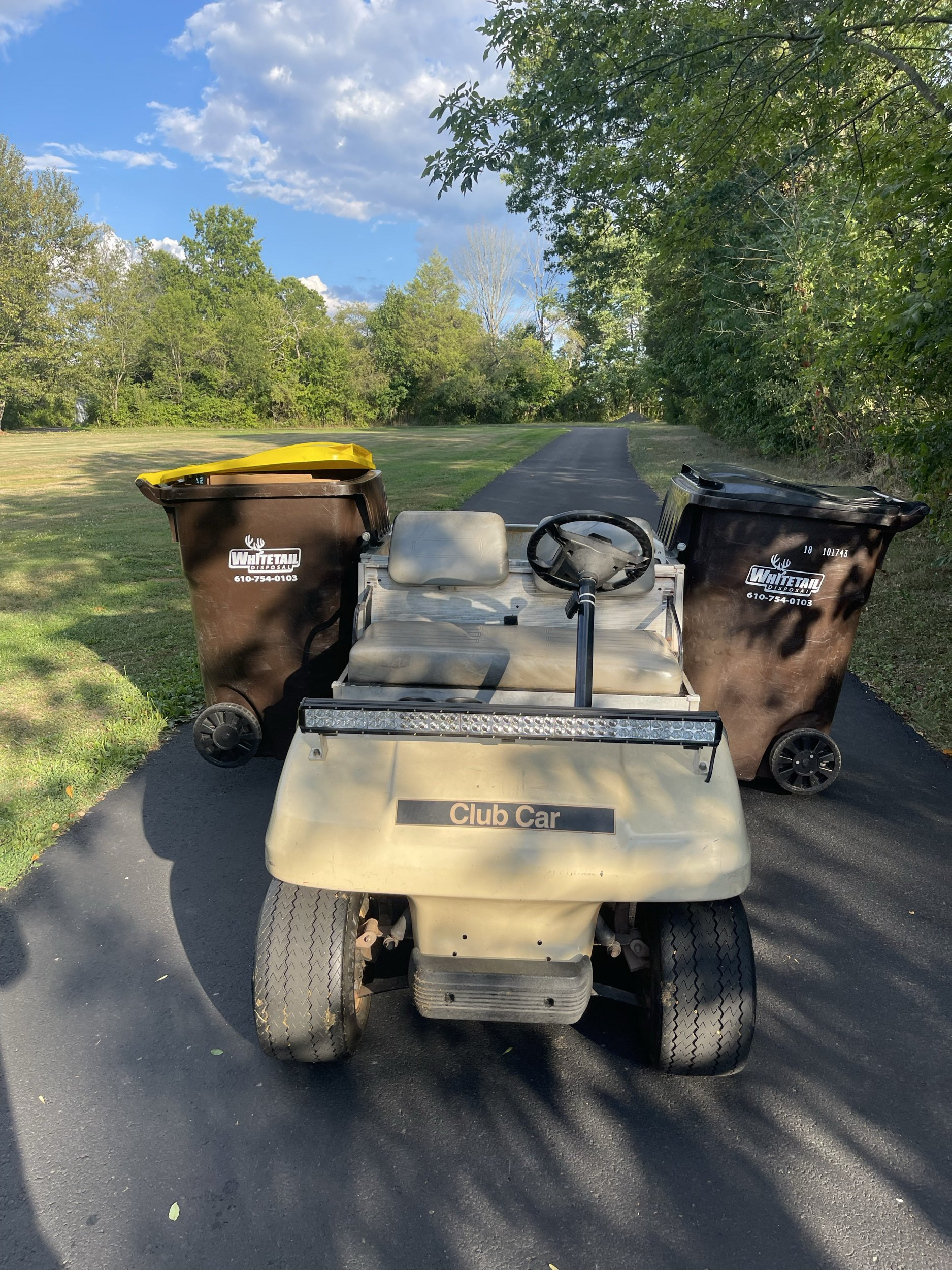 This morning will be back to the airport to install the exhaust and continue to look for things to fix, but I should be able to finish it in a few more days unless I find more things that require action other than lubrication or adjustment.

Today is the opening day for the North Texas Fair & Rodeo in Denton; not the State Fair that's always in Dallas a little later in the year. We never go to the one in Denton because it's always early enough in the year that it's so miserably hot.

9 days and nights of non-stop fun with some of the hottest names in Country Music and nightly Rodeos. Gate Admission gets you into Concerts and Rodeos with no extra charge. Plenty of shopping, good food, Kid Zone activities and Fun Zone, GREAT EVENT FOR ALL AGES

Bird said:
I was surprised to get caught in a small cloudburst yesterday. My gauge got about .17" of rain while the NWS shows the airport 10 miles from here got .41". And this morning our temperature is all the way down to 74° and only forecast to go to 92°. Maybe decent weather in our future.
Click to expand...

Didn’t you say you forgot what rain looked like?

Glad those needing rain got some.

PJ, glad you had a great birthday trip. I love river bluffs.

Alien, hope the doc figured out what is up with your shoulder. Then tell me so I can get a free diagnosis.

Wag, sorry your parade got rained out.

M7040, what a beautiful historic place!

LS, I bet your tools like getting a nice shower.

BEF, looks like we had the same agenda yesterday...I've got cabin and mountain pix to post, too. I hiked another section of the A/T yesterday...it was such great weather...59F to start and never got above 70. I love the adiabatic lapse rate. Your pix are great. Is that Wisp?

Hiked my personal best in distance yesterday, at least the longest non-stop hike since I was in my 20s. I talked to a number of other hikers, including a group of 11 backpacking college students from Georgetown. I'm always happy to talk to a group of the younger generation that look, act and speak so well...very encouraging. They were hiking to Pocosin Cabin, which I'll post a pic when I switch over to my phone. Had several other interesting folks to talk with for a short spell.
Aug 19, 2022 / Good morning!!!! #154,640

Nothing like having the right tool for the job, Paul.

And welcome back, Paul, glad you're getting some fun out of the kayaks.

Didn't take long to knock together the pole mount yesterday morning, but hope of getting it into the ground went out the window when I decided it needed a coat of paint to finish it off. It was hot enough to be uncomfortable in the garage by then anyway, so I had some lunch and headed into town to run some errands.

Swung by the BMW dealer to see about the cylinder head for the red bike, and it's toast. It can be repaired, but the cost would be more than finding a replacement. Meanwhile, the folks repairing the cylinder called to let me know it's done and is on its way back here. Time to hit the interwebs and find a new-to-me cylinder head.

Early afternoon and I got a text from the seller of the motorcycle with a photo of the driver and the bike loaded into his Sprinter Van. Then later another text from the driver himself saying delivery would be today after midday, and he'll update the time when he gets closer. It's about a 12 hour drive, so who knows when it'll actually show up. But at least he seems willing to communicate, more than you can say for any of the big shipping companies.

Apple released a bunch of security patches yesterday. Just a heads up...

It would be nice to have the full width of the driveway available for the delivery, so this morning I'll swap out the box blade for the scraper and see if I can't get most of the trench filled. Depending on how that goes, I might even be able to get the pole mount installed and fill in the rest of it, too.