In the meantime -- and because I NEED my tractor (withdrawal??) -- I decided to go at it again. Jacked the engine up, removed the front two mounts and, after much playing dangerously with a pocket knife, screwdriver, razor & a pair of vise-grips, was finally able to remove the one metal plate that was still bonded to each one. Chocked the rubber blocks in a vise and --surprise!-- was able to drill a hole through them. I then used two 5/16 x 2-1/2 bolts with fender washers, nuts and locks to re-install them.

No, it's not right, but at least they're holding the engine in its proper position while providing some cushioning. Now back to mowing.... and waiting for the right parts...

PS-- it sure looks naked without all that red sheet metal!! :laughing: 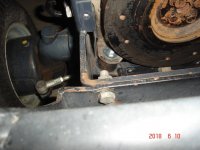 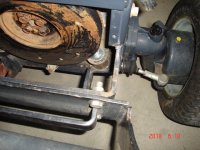 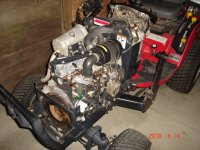 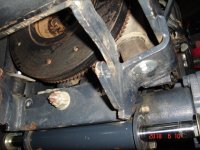 You just jump right into the fray.

My question would be - this seems like a significant thing and I can't imagine if one came loose that the other three would just do the same unless it happened over a long period of time. it would seem that there are seals in connecting components being stressed or fits being separated with an engine actually moving. Even wires being stretched.

While your warranty is certainly long ago expired - its hard to believe that just going down hills would be a cause - and I'd think checking with a good service department might give an idea if there isn't some issue established for checking for this or some incident reports or maybe a recall of selected units. Imagine what wouild be the cost of this - if you weren't skilled enough to service it yourself. Parts are a small part compared to labor on something like this.

As a preventive maintenance thing - how would an operator even be able to check on something like this ?
Jun 12, 2018 #19
OP

Thanks, but definitely not fearless... at least not as much as I used to be, for sure! It's just that my lawn is getting taller and I'll be da$#@ed if I'll pay somebody close to $200 to mow it for me, and I'm having doubts about how soon I'll get those factory parts. Necessity often gets me motivated! (Hey, I may be cheap, but I'm CHEAP!!)

Now when it comes to one of my "restoration" projects, a 1971 Honda CB 100 (yeah, a 100, a real monster) that I just got running fairly well recently... yesterday the kickstarter shaft broke clean off. That means a full engine removal, tear-down and case split, and I'm not really sure if I want to tackle that. Just don't have the confidence I used to! (Getting lazy in my old age??)

As far as preventive maintenance on the motor mounts... no maintenance, but it might pay to take a look at them every now & then. You're right, I'm sure one broke initially, placed more stress on the remaining mounts, and progressed from there. Still not sure why, however; just wish I'd picked up on it sooner.

As far as damage due to the engine shifting, no, at least not that I could see. My biggest concern was the driveshaft, connected directly to the engine crankshaft, that goes under the floor to operate the main hydraulic pump (the one with the plastic fan on it). Fortunately, there's --apparently-- enough splined-shaft length in there that it didn't pull out completely. Now THAT would have created some REAL issues -- I shudder to think of that scenario!
Jun 12, 2018 #20

Those look like the common bonded isolation mounts you can get at McMaster Carr for around $2.50. Chances are that one failed due to fuel or oil contamination and allowed more movement which exceeded the movement range of the rest, causing them to let go. What you've done with the thru bolt is how it should have been done from the start. Granted, you might get a few harmonics that you wouldn't get with a true Lord mount like the PA-22 has, but you won't have the engine wandering.
You must log in or register to reply here.
Share:
Facebook Twitter Reddit Pinterest Tumblr WhatsApp Email Share Link