RockWrangler - I will repeat a couple points. Forget the relocation program - use traps that kill. Place the dead bodies in an open spot on the property. Those further up the food chain will take care of the bodies. Continue to use the same spot - the hawks, owls & coyotes will keep the spot clean.

After five years we quit with our open garden. Deer, raccoons & gophers would not share. I've gone to raised planting beds with some success. Definitely keeps the gophers out of the plantings. Arched roofs of chicken wire discourages the deer and raccoons.

Barn cats will be a definite help with gophers, mice and maybe even marmots.

BTW - my property is one and a half miles due north of Amber Lk.

It has been a while since my last marmot report, so here is the latest update: As of today, in a little less than a year, we have trapped a total of 103 yellow-bellied marmots, 35 in the month of May alone. What makes that number especially remarkable is marmots hibernate from September to March or May (depending on who you believe). So they are above ground to stuff their yellow bellies just 5-7 months a year.

As I said earlier, we moved to eastern Washington State two years ago, after 45 years on the west side. Until we arrived at our present location, we saw occasional marmots while hiking in the Olympic or Cascade Mountains, but didn’t pay them much attention. When I read a couple local newspaper articles of the “Aw gee, aren’t they cute” variety, I thought I could live with them. Then I realized they were getting more of our garden than we were.

Oosik suggested I kill-trap the critters, and pile up the dead bodies for the local scavengers to feed on. I am of the same mind, and started out burying them in a low area. But I am located on a rocky basalt shelf, and the soil is too thin to cover what would now amount to nearly a thousand pounds of rotting flesh. My property is too small to dump the bodies on a remote corner, and the neighbors likely would raise a stink over the stink. Right now, relocating them to a nature preserve seems to be the best solution. I think I have seen a slight drop in the population, so I will keep doing what I am doing.

The newest bane is pocket gophers. We trapped moles on the west side, but gophers are a new puzzle for us. I intended to trap and poison them once I saw evidence of active tunnels, but everything happened at once. I saw a few new hills while doing my evening chores, and the next morning my newly sprouting garden was gone, right down to the ground. 40 feet of peas, 70 feet of green beans, gone. Oddly, all but one pepper plant were eaten to the ground. I’ll have to wait to see what else sprouts to find out what the gophers didn’t get. We are still trying to figure out the rules for our new location.

I haven’t mentioned the starlings that hit my cherry trees last year. My wife said it was like one of the Biblical plagues of Egypt. This year’s cherries are starting to ripen, so we may have that to look forward to again this year. Sorry to ramble, but I suppose we could call this thread “educational.” I am the one getting the education.
Jun 11, 2021 #24

Pocket gophers. I remember watching a Bugs Bunny cartoon a long time ago, wherein Bugs' carrots disappeared underground, zip, zip, zip. Bugs was not happy. At the time, I thought Walt Disney was exercising creative license at how fast and how voracious a pocket gopher could be.

Then I moved to California.

Nope. Walt Disney was on the money.

Our original back garden grew all sorts of vegetables, and spectacular gladiola, as in five to seven foot tall gladiolas. One afternoon, I happened to be out on the deck, and I saw a five foot high gladiola in full bloom tremble, or shiver. I watched, fascinated. Shake, zip. The gladiolas was six inches shorter. Shake, zip. A foot shorter. In less than thirty seconds the whole plant had been pulled underground. I was amazed. After the first year, we had "volunteer" gladiolas growing all over, wherever the pocket gophers had cached a few bulblets. They seemed much more interested in the gladiolas than the vegetables, but they ate some vegetable, too.

I trap the pocket gophers, but I have to say that gassing them with smoke was more effective, and underground screening even more so. At least two feet down with half inch mesh galvanized, or galvanized and PVC coated mesh. If you have ground squirrels as well, you need to electrify the above ground portion to exclude ground squirrels. Here at our current place the fire risk is too high for me to use the smoke sticks.

I have to say bean plants eaten to the ground sound like deer or rabbits, unless there is a hole or fresh digging at the base of the plant.

Like @MossRoad, we put (have to put) bird netting over all of our fruit trees, or the birds eat everything.

Pocket Gophers: I have experience with this. This might nor work for everyone but it absolutely worked for me. CATS!

Our cats keep our yard completely free of pocket gophers. When we brought the cats to our place in E. Texas the yard was over ran with pocket gopher mounds. After a couple months we noticed a definite reduction in mounds in the yard. Now it’s rare to see one and they don’t last long.

The cats also eliminated the moles in the yard. They would bring moles and gophers up to the door and leave them or we would find a cat in the yard eating a mole or a gopher. The cats work at this 24/7.

ponytug said:
I trap the pocket gophers, but I have to say that gassing them with smoke was more effective, ... the fire risk is too high for me to use the smoke sticks.
Click to expand...

What are "smoke sticks"?

I am suddenly (not by choice!) interested in this marmot/pest thread. Voles just showed up in my wife's garden in NV, and we had an explosion of gopher activity in CA this spring.

I'm guessing the same thing would happen regardless of if you moved the marmots or killed them... when one leaves, another takes it's place. You'd have to stick with it for years to make a noticeable difference.

We have a family friend that traps squirrels on his small city lot and lets them go in a thick woods several miles away. He's been doing this for 30 years, yet still traps 40ish squirrels every year. Never makes a difference. Where there's a gap, nature fills it.

I've written about this several times here on TBN, but I'll tell it again.

Around 1999 or so, we had an above ground swimming pool. We had moles in the yard, but I never gave them any mind, just flattening down the hills when they popped up. Well, one day they undermined the pool, the liner popped, and 12,500 gallons of water went rushing through our garage and out to the road. The battle was on!

This was in August. I bought some mole traps and killed 29 moles from mid-August until winter.

Then, year seven:
Only 6 moles.

Every year since:
Just a couple, maybe 3 at the most.

It was quite eye opening. From most accounts I've read, "An acre of land will support a few moles. They are solitary and only have up to 4 pups per year." Yet I was running 6 traps non-stop. Some days I'd get two from the same trap hole in just a couple hours.

This guy knows his stuff. I recommend reading everything on his site if you are having mole issues. It helped me quite a bit. 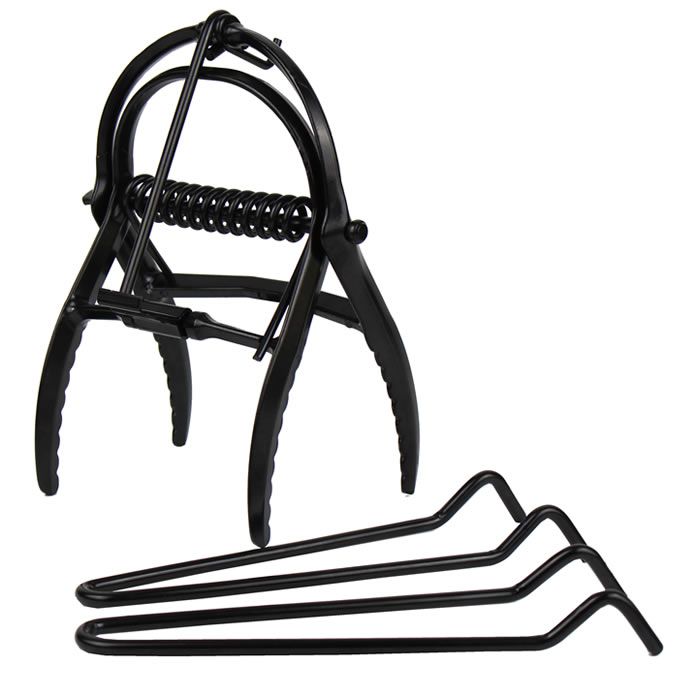 Searching for the best mole trap? Buy the safe, strong and durable Victor® Out O'Sight® Mole Trap for clean and quick mole trapping.

I have pocket gophers, mice and chipmunks here. Plus the occasional skunk, raccoon and porcupine. Coyotes, hawks & owls can be a benefit but keep your barn cats well protected. HERE is exactly 25 miles due SW of Spokane. They are all given the same respect/treatment.

I don't use any type of poison bait - I have a small dog that puts about everything in his mouth. And I don't want to be feeding the predators poisoned food. Everything that expires is placed in the same open, high spot for the predators. I don't have hundreds of anything here. Forty years of aggressive control programs have brought these buggers to a manageable level.

Pocket gophers & chipmunks is the reason we quit gardening after four or five years. It's not a whole lot of fun to see your garden disappear after hours/days/weeks of labor. The local grocery store is a much more reliable source.
Jun 11, 2021 #30

I put 7 foot chicken wire on 12" metal raised beds.
The groundhogs got in by forcing their way between the metal bed and the chicken wire.
seems to big one big GH and a baby.

Don't want to use poison, too many other creatures I don;t want to kill, including my dog.

Relocation is not a good option. I remember the park where I used to live. Everyone dumped their GH there.
At one point, you could see hundreds (literally) of GH all nesting along the 2 mile road through the park.
Who knows how many were in the woods ....

Trying to figure out what to do since GH are not normal for this area, but I know where I see 2, the population is already getting larger. I am hoping our foxes would take care of them, but with so many rabbits, I don;t think they will bother.
You must log in or register to reply here.
Share:
Facebook Twitter Reddit Pinterest Tumblr WhatsApp Email Share Link