Good luck with your new tractor.
Enjoy and be safe

blue9steel said:
In this case it's not the pivot bolts, it's the ones that look like they're supposed to be "hand loosened". They're impossible to turn by hand and even with a large wrench were annoying to remove. I don't know, maybe I'm supposed to take them out and put 4in1 oil on them or something? With the finger knobs welded on top I can't even use a socket wrench.
Click to expand...

Is it possible for you to get a picture of the main pivot? Taken from the rear and just a little higher than the pivot point so that we can see how it is assembled? I'm wondering if there may be some washers missing.
May 26, 2022 / New Purchase #183
OP
B

The Kubota I used to own but had a fixed ROPS. My current JD is a folding ROPS and takes about a minute to put up or down. I have to think Kubota has a similar system and it should go up and down easy.
May 28, 2022 / New Purchase #185

blue9steel said:
Hah, I don't doubt it, who doesn't like playing with their new toys?

Well as long as we're waiting around for delivery, what are some other attachments I might want?
Click to expand...

We have lived many years on similar size property, not too far away from your location and for us the most useful tractor attachments are:

However the little cart I made for my old garden tractor & ATV is indispensable since we are using it to haul all kinds of material frequently.
It was meant to fit in tight spaces, easy to unload & handle a pretty heavy loads and works well for intended purpose. 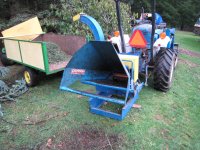 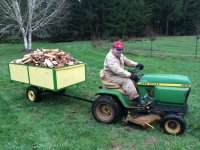 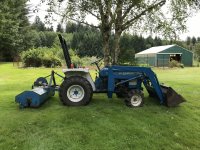 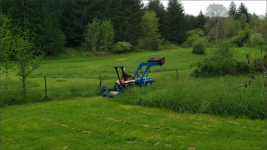 I've been very tempted to get a wood chipper, it's on the list but I need to fully use what I have first before I try and convince the wife we should get more toys. Of course if I do, then I have to learn to properly use the three point hitch & the PTO, but I'll get there. Currently I'm using it to raise/lower the grading scraper but that's because it's already attached.

With the help of the delivery guy we were able to figure out the ROPS. The issue was a bit of confusion on the anti-rattle bolts combined with the whole thing just being very new and tight as well as the ability to thread a wrench through the finger knobs that I hadn't though of. As it turns out I can park the thing in the lean to with it up, so that's important knowledge but less urgent.

Tractor was returned with brand new 3" wheel spacers on each side today. I can tell it's significantly more stable and I was able to get up a ramp I've been building in a reasonably steep hill that previously seemed too dangerous. Now that I can make it all the way up I think I can lay in some gravel and use the grading scraper to make into a decent entry ramp for that area that doesn't require me to drive over the nice part of the yard.

This weekend we're going to look at gravel, we need quite a bit of it. Our stall rakes have 1/2" tines so I'm thinking 3/8" minus (with fines) is what we want but the wife wants to look at it and judge it by eye. Anyways once we agree on a size we're going to have a dump truck load brought in so I can start putting this beast to real work. I've played around with the bucket a bit digging out the ramp, but nothing to serious so far.

I'm starting to get pretty good with the zero turn mower, I love that thing, totally worth the money. I wouldn't mind figuring out how to carry some tools with it though, maybe there is some kind of attachment or after market add-on.
You must log in or register to reply here.
Share:
Facebook Twitter Reddit Pinterest Tumblr WhatsApp Email Share Link