Would ethanol gas do this? 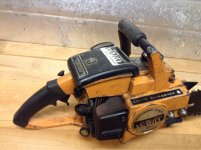 This is my latest project. A Montgomery Ward saw I traded for a bedroom door. I think it was made by Remmington (Arms) in the 70's,

The guy I got it from only had it a couple weeks but had gotten it from an older man who said he hadn't run it in a couple decades. Supposedly it worked when he had last used it.

My friend said he tried to get it to start but only got a couple of pops out of it.
I disassembled it, blew the crud out, put a new plug in it, and it started as soon as gas got to the carb (3-4 pulls).
It smoked like a chimney, so I asked my friend what gas and oil he had put in it.
He said "I didn't, that's the gas that's been in it!"

I use Stihl motomix so I don't wreck my saws, blower and weed wacker.. A couple of months is about all this junk gas we have these days is good for.. The motomix isn't cheap ($60 a case of six) but I only go through a case a year so I don't mind the price.
Apr 5, 2015 #3

Ethanol will definitely cause the problem you had. Pure gas can store for a long time. Use Sta-bil and it will last a year and you can just add more to keep it going.

I use nothing but pure gas in my boat and small engines. I add Stihl fuel mix and no problems even if I don't start it for a year.
Sounds like you got a good trade. Just needed a little TLC.
Apr 5, 2015 #5

This weekend i started 3 minibikes, 2 motorcycles, all ethanol gas 5 months stored, no stabil, easy start. Only thing I did before starting was lay them over to mix up the gas.
Apr 6, 2015 #6
J