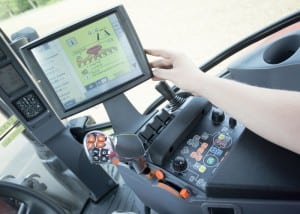 The instruments used to an increasing extent in the practice of precision farming are without doubt among the most important milestones in farming technology since the advent of modern technology. That will also become clear when the new Steyr S-Tech 700 monitors are unveiled at Agritechnica. In the competitive interface that exists between brands and data formats, it becomes ever more important not to lose sight of the goal, which is to deliver maximum benefits to the customer. That also includes rendering the data and services of external providers accessible, and creating applications that function on any system platform.

“A key feature of the new S-Tech 700 monitors is that data can now be adopted in Shape File format for further processing purposes. A second key advantage is that, through the interaction of the S-Tech 700 and the new ElectriSteer steering motor retrofit solution, third party makes and older vehicles can now be operated to high standards of precision”, reported Ulrich Sommer, the product marketing manager for Europe, the Middle East and Africa.

“With a view to maximum customer benefit, it was important to us to make S-Tech precision available not only on board our own modern tractors but also on third-party makes and older models”, explained Sommer. “Thanks to the interaction of the new ElectriSteer universal steering motor and the current S-Tech 700 monitors, we can now provide a precise steering system for all vehicles and makes”, stated the precision farming specialist. A clear advantage of this retrofit solution emerges clearly through its ease of installation, which can be accomplished without any modifications to the steering column or steering wheel. Ulrich Sommer goes on to add: “Since the system can operate reliably right down to a minimum speed of 1.6 km/h, and since it also reliably detects changes between forward and reverse directions of travel, familiar tasks can also be performed using older vehicles or third-party makes – performed much more precisely and at the same time in a much more relaxed manner.

ISO XML is now used right across the world as a standardised language, also for the exchange of data in the agricultural technology sector. In the case of ISOBUS applications, the Task Controller on a vehicle is able, thanks to ISO XML, to act as an interface between farm computer, tractor terminal and job computer on any given machine, handling the configuration, compression and transmission of control data while at the same time also collecting application data for transfer at a later date to the farm computer. With immediate effect, the user is able with the new Steyr S-Tech 700 monitors to output the data, e.g. harvest yield data, in ISO XML format without having to run ISOBUS applications. That assures perfect compatibility for the user between different devices, all within a standardised data format.

Since the new S-Tech 700 monitors are now also able to process data Shape File Format, this greatly simplifies the process of exchanging data with external partners. This means that application maps prepared by consultants for fertiliser and herbicide spreading, maps of swath routings across fields or even external land registry records relating to field boundaries can be accessed, frequently in Shape File Format (SFF). “If external data can be loaded directly into S-Tech 700 displays in this format, that constitutes a clear efficiency gain and a tangible simplification of working operations”, stated Ulrich Sommer. This also becomes evident from the fact that the track routings recorded by means of Trimble Displays are now compatible with our system, i.e. 2-way exchange and usage is possible without having to divert via formatting software”, concluded Sommer.

Precision right into the last corner

In the past, automatic track guidance systems, particularly on convoluted headland areas, often reached the limits of their capabilities and the contours of the field were then not always cultivated as cleanly as they could have been. “With the new S-Tech 700, it is now possible to work in those headland areas to maximum levels of precision. While the system meant that certain corners used to be ’rounded off’, the S-Guide™ steering system also enables the corners of headland contours to be cultivated accurately and processed cleanly. That enables our customers to utilise available surface areas to an optimum extent, and to avoid mistakes reliably”, stated Sommer.

Another feature of the new S-Tech 700 monitors is that GPS coordinates and compass directions can be read off on the display and then transmitted manually to other devices. This for example permits simple manual communication and transmission of swath routings between vehicles without the need for a USB pen drive.

Tramline errors? No thanks!

“In the past, ‘counting errors’ were not uncommon in practice as a vehicle negotiated its lines across a field. The 3D field maps in the S-Tech 700 display eliminate this source of error. In the display, the swath routings are colour-coded, showing whether a tramline has been or should still be set up. In practice, very simply, this means that the tramlines can now be mapped out reliably, precisely and effortlessly, even on long and demanding working days”, reported Ulrich Sommer.

‘GPS’, ‘ISOBUS’ and other terms stand around the globe for precisely the same functionalities and, at national level, individual activities and functions can be communicated using generally comprehensible terminology. “In our opinion, all of this can be designed more individually and more simply. For that reason, our customers can now identify the individual work screens on the new S-Tech 700 monitors with individually selectable designations. There is no longer any need there to write ‘Run 1 to Run 6’. Instead, the tabs can be named to suit individual tastes with corresponding terms, and this makes menu-guided operation much easier in each individual case”, stressed Ulrich Sommer.

“The updates for the current S-Tech 700 displays make one thing clear: We wish to provide the users of our technologies with the maximum possible benefits, and therefore we seek to support them and relieve their workloads to the greatest extent possible”, concluded Sommer.