Unfortunately for me, it was 90 degrees under a blazing sun. Way above average for late August. I don't want to complain about an ideal summer day; I guess I'd just rather be on a lake or river for it, lol. I work in an air conditioned cubicle every day.

And I forgot to bring a hat, sunscreen, or even enough water. Dumba$$. I figured they might have a box of freebie hats from caterpillar, kobelco, or something like that. After asking sheepishly, they did not. Oh well! I drove back and got started on hooking up the trailer, just to pull it forward and unload the tractor for a test drive. 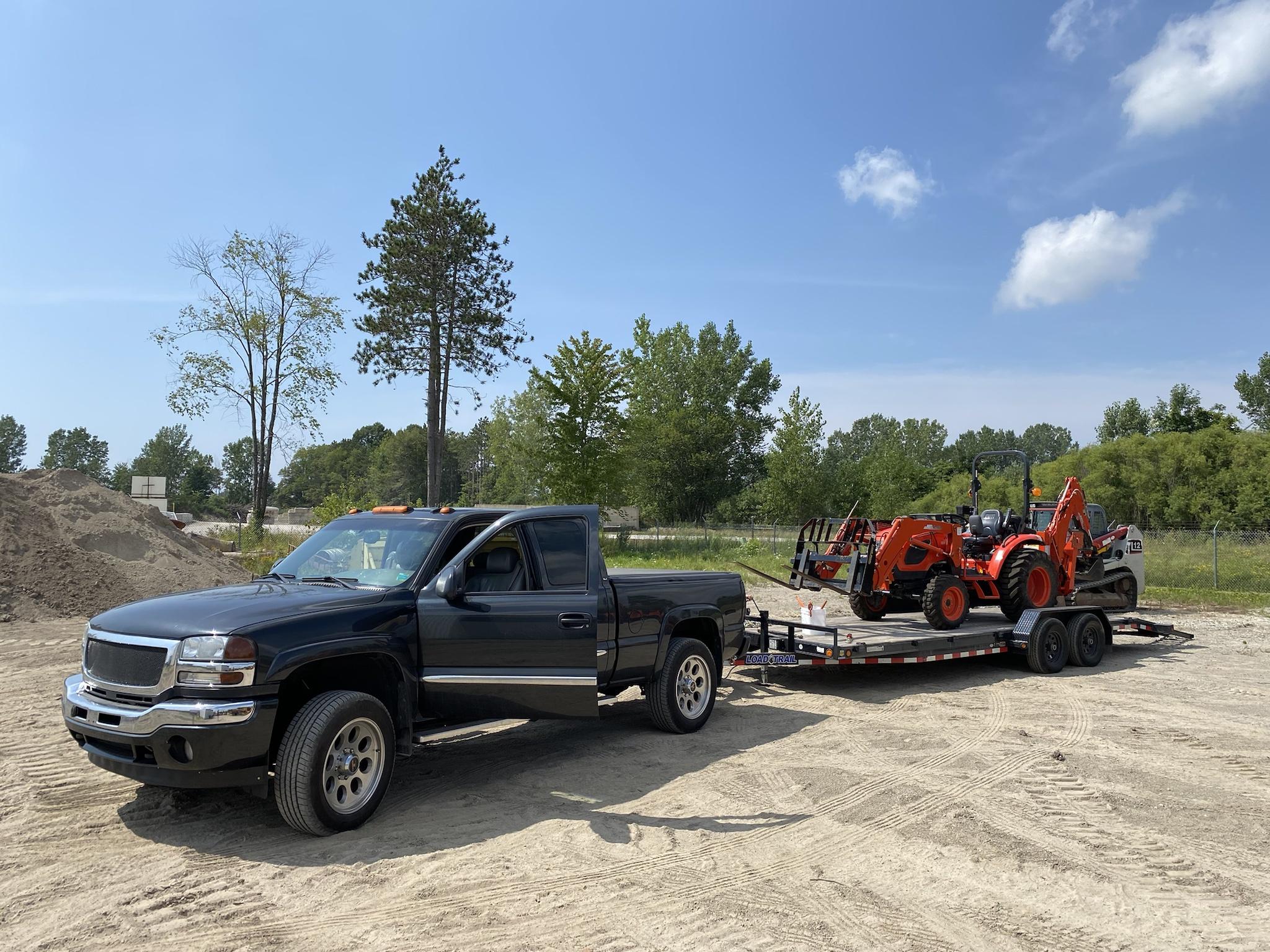 The coupler on this load-trail trailer was a new style for me. We forgot to latch it, and it came off the truck as I backed off the trailer! Thankfully I was creeping extra slow, so it just kind of teeter-tottered in the air until we could get the tongue jack back down and re-secure. Could have been bad. I think I will also have to carry some jackstands with me for loading and unloading this setup, because the machine is heavy enough to basically tilt the trailer rear end into the dirt, and lift my truck rear end. Almost dont need the ramps, haha. Anything other than level ground could be dicey.

The good news is that the tractor ran great, the backhoe and grapple worked perfectly, so it was time to start loading up for transport home. This took a while. 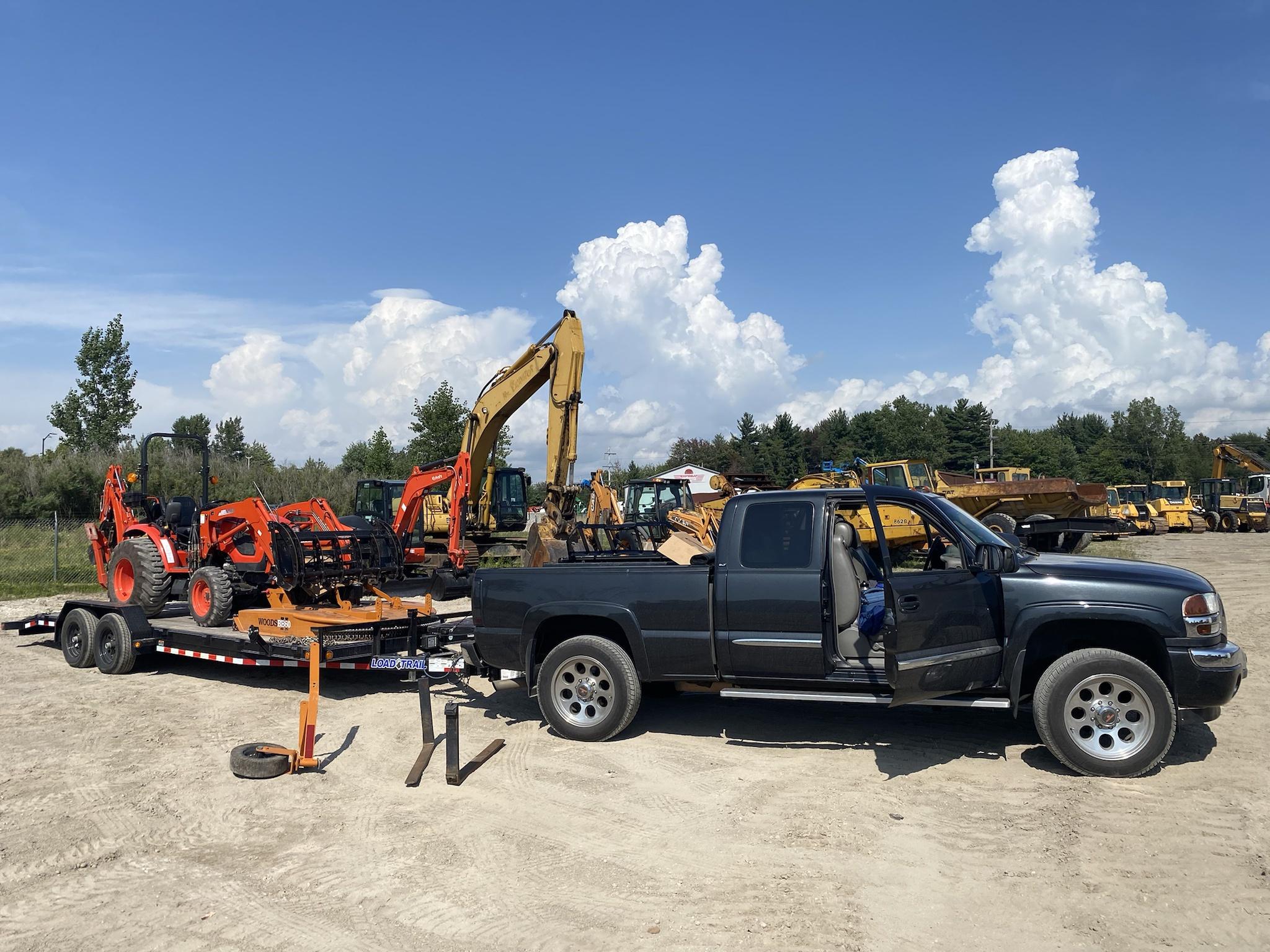 Had to swap attachments, get the bucket, forks, and quick hitch into the truck bed. Took the tailwheel assembly off the brush hog, threw that into the bed also. Then lifted the brush hog up onto the front of the trailer, so the tractor loader could set down on top of it. This was a heavy load, but just under max capacity for the trailer (9990 GVW) and my towing capacity (10,500 w/ weight distributing). I was probably close to my GCVWR with the attachments in the truck bed, and all the tools I brought along.

I had never chained a tractor down to a trailer before. Ron kept getting phone calls so I had to just figure it out. I should have brought a clevis along for the rear drawbar, but then I saw how easy it was to take the chain hook end off. And then the chain itself could fit through the biggest hole in the drawbar. Up front, the front axle pivot-bearing housing was really beefy, and had a nice spot for a chain to route through. Got the binders super tight and was feeling good. Threw my collection of 2" ratchet straps over everything else. Then back over to their shop to get the soggy trailer tires back up to 60 psi, sign the invoice, chug some water and head out!

Since I was over in Holland, MI, I met up with some dear friends from the area for dinner at a new hipster taco joint. Taco+Bar – Holland, MI Do recommend. I may or may not have had a margerita. 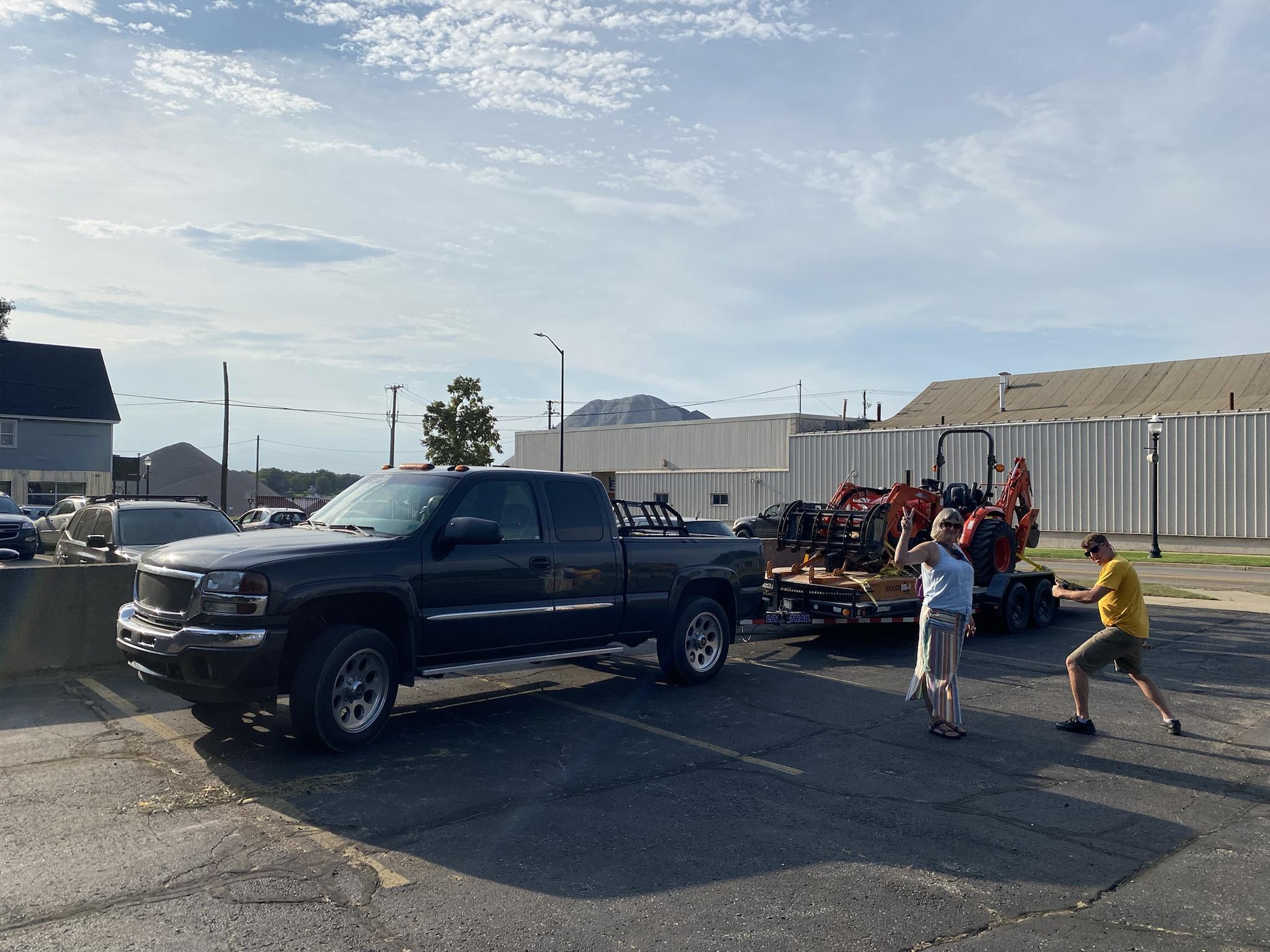 After dinner it was time for the 2.5 hour cruise home. I was a little nervous setting out. This was about as heavy a load as my truck has pulled, aside from short dump trailer runs for gravel/soil. So I started out around 60-65 mph. It pulled supremely smooth on asphalt, but bouncy on the concrete sections of highway. Whatever idiot thought that laying 20 feet of concrete at a time with bumps and grade changes in between the sections was a good idea for a highway.... I'd like a word.

I was hoping to get home before dark so that my son could help me unload. But alas, the skies darkened and severe thunderstorms materialized all around the state. Somehow, I managed to thread the needle and dodge them all, only driving on some wet pavement. As a bonus I got to chase rainbows and watch the lightning storms to my north. 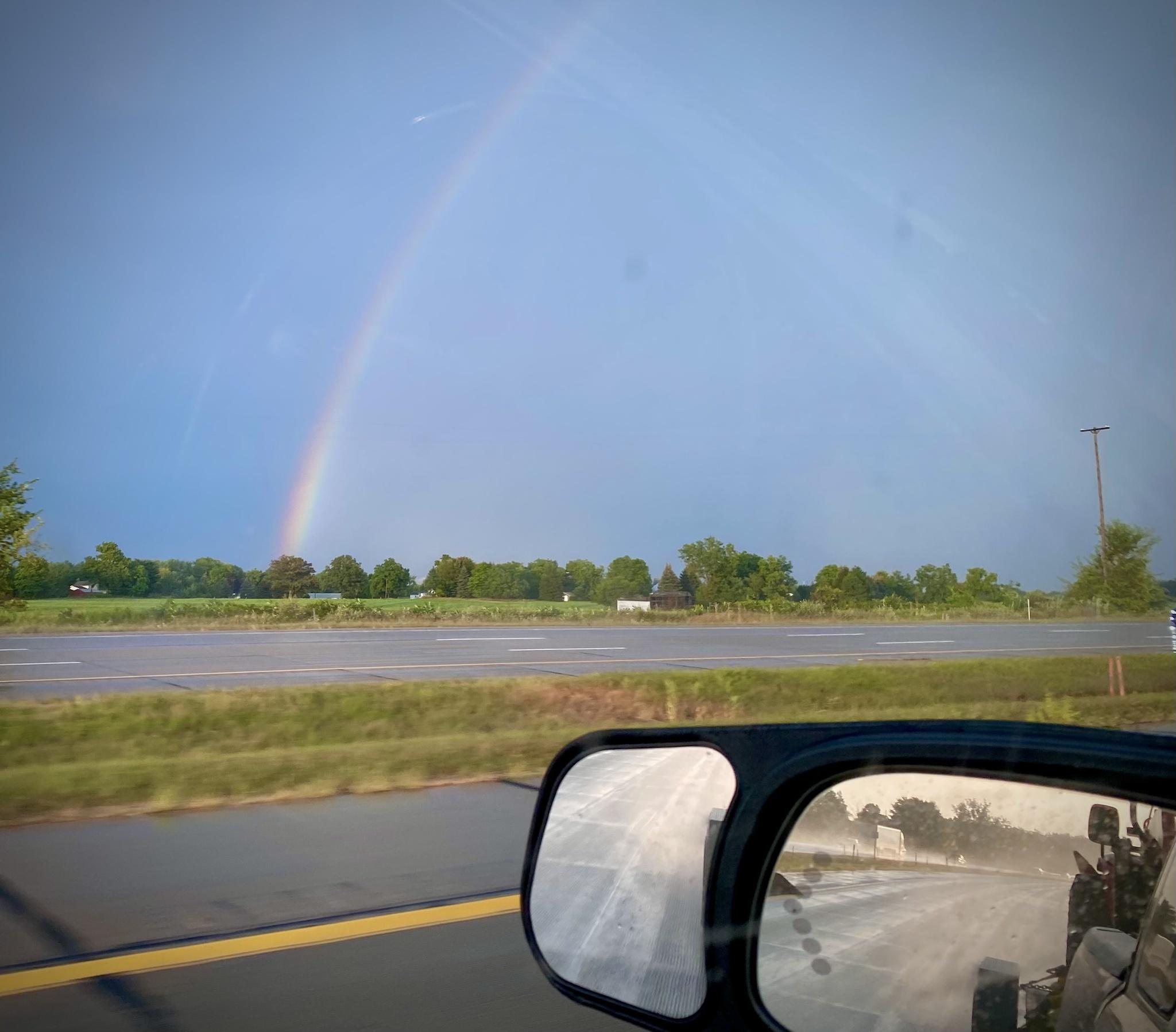 Pulled into a rest stop to pee and check straps. Chains and straps were still super tight! 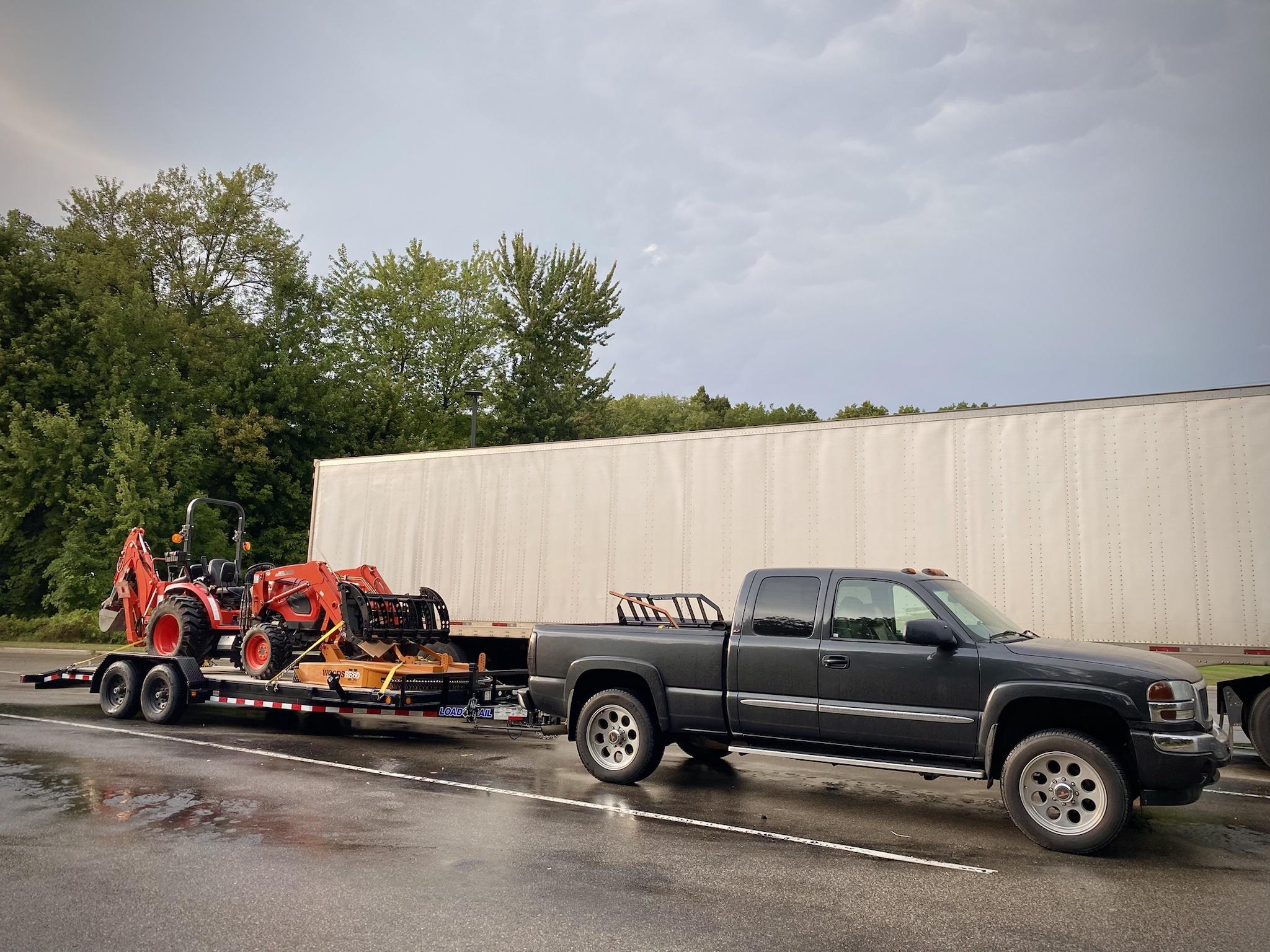 And finally made it home at 9pm. My son was still up, but fully engrossed with his new 1300 piece lego technics crane set (his 8th birthday was monday). Hopefully he has checked out my new toys by now, who knows.

Then it started raining again. I figured I might as well scramble to unload while my chains and straps were dry-ish. Clementine snuggled right into her new home. 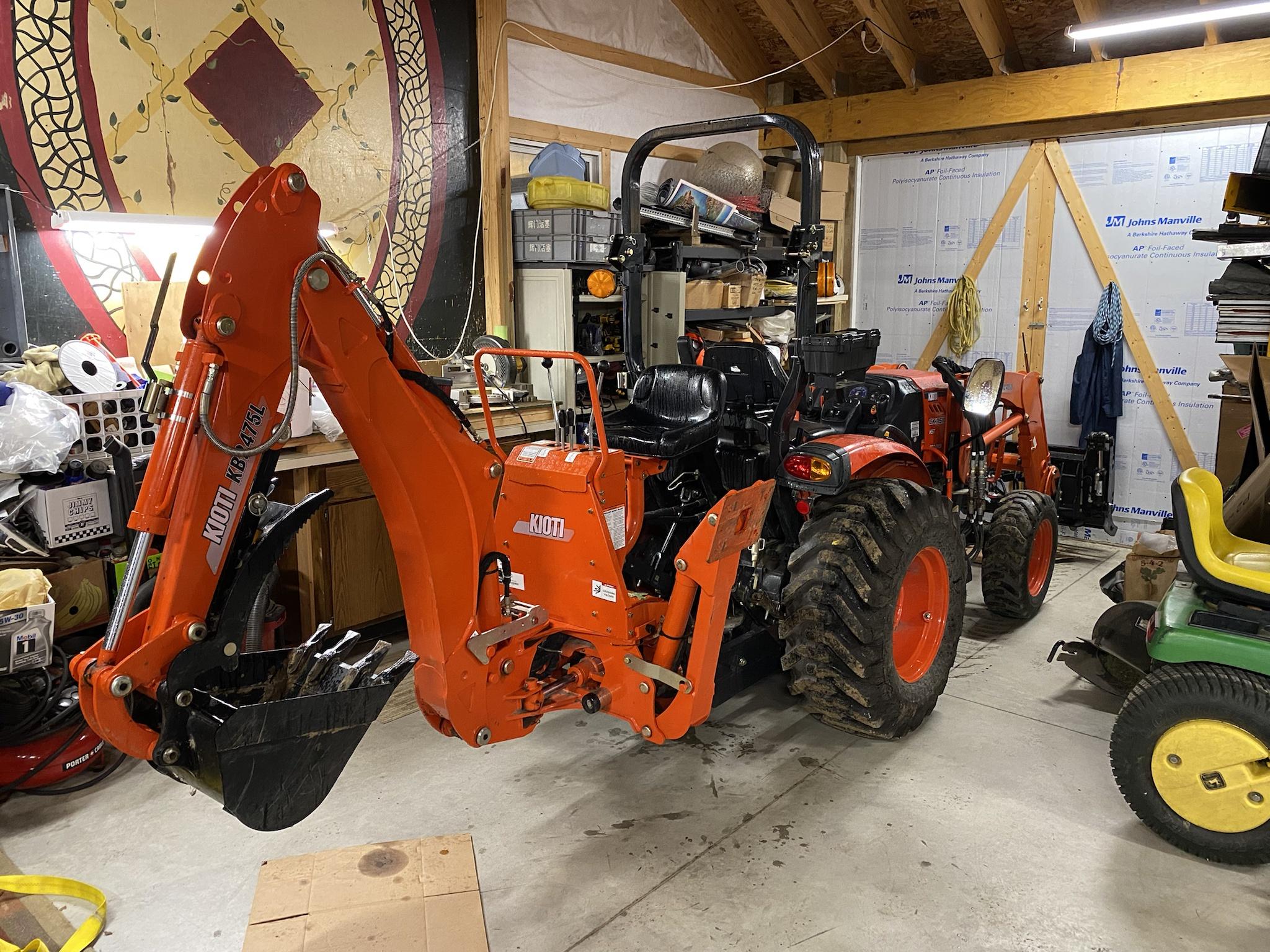 Oops that all got super long. I suck at keeping things brief but hopefully at least some of you will enjoy the story. Honestly this whole thing feels like a dream, almost destiny. I somehow find the exact (seriously EXACT) tractor I've been wanting, with the exact setup (backhoe, 3rd function/grapple) that I have dreamed of but likely be too chicken to spring for, with the EXACT trailer I've also been wanting. All for a price thats at least $12k discounted from new/MSRP, after only 100 hours of use. Not to mention after all the covid BS, you can't hardly find these things to buy right now. No waiting or fussing around, I just get it all in one shot? And my wife was somewhat unexpectedly cool with me spending this much? And it was a short road trip away in my own state, where I could get some tasty tacos with a buddy for dinner? And then cruise home with my favorite tunes blasting, looking at rainbows and lightning?

Oh and I forgot. After unloading and starting to reconfigure attachments in the RMB yard, Ron came scooting back out in his golf cart with an awesome surprise - they did find a hat for me! Is it weird that I'm almost as stoked for this hat as I was to get the tractor package? I might still have to buy my own Kioti ballcap, but this was a pretty sweet gift. 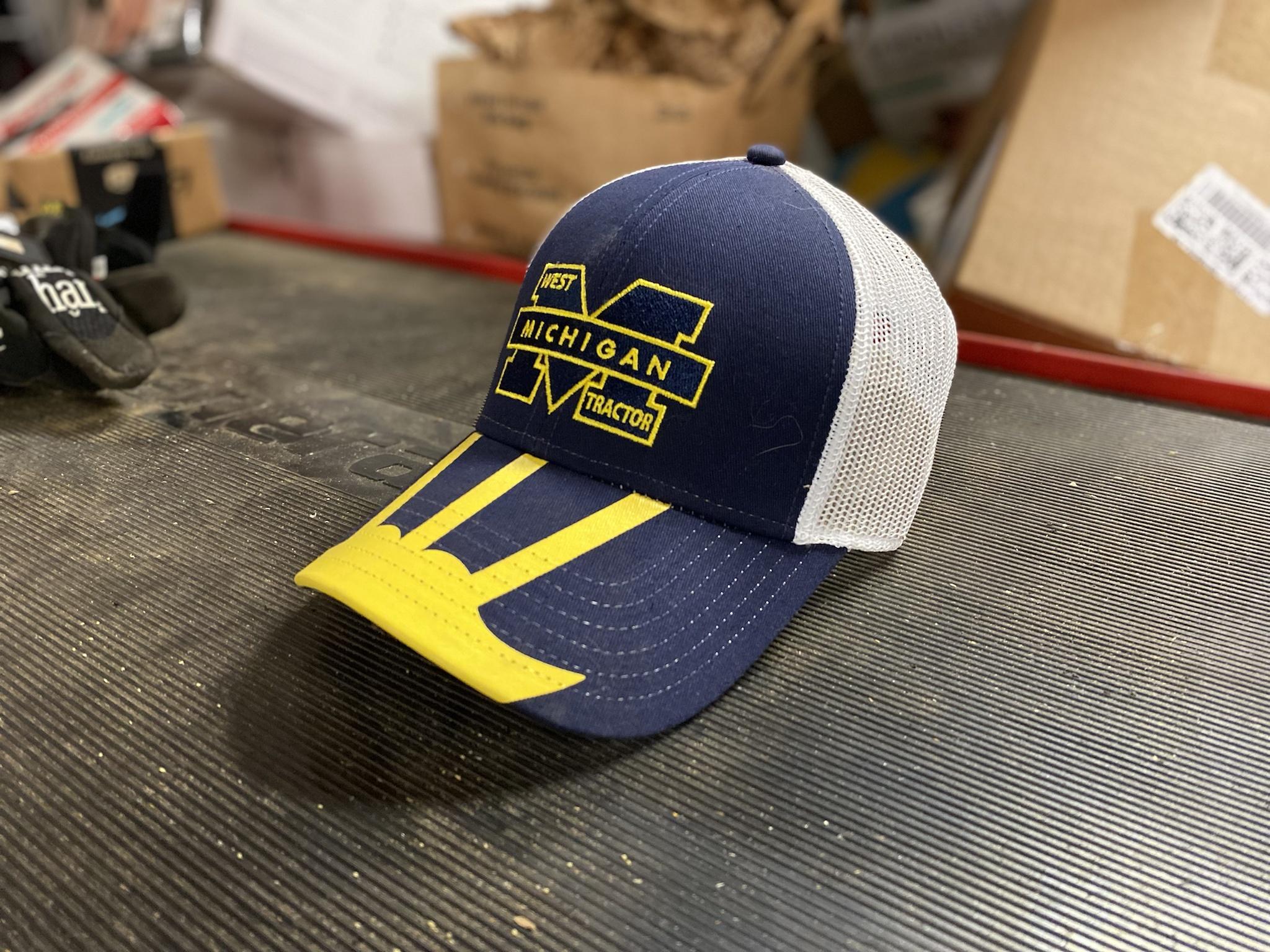 A couple final tidbits for now:

The Kioti website, and tractor data, all say that the ck3510 ROPS is 99" tall. Why any tractor manufacturer would make their machine just over 8 feet tall, instead of just under, confused me. I have a nearly 9 foot barn door in front of clem there, so no worries, but my main garage doors are 8 footers and I was sad to think I'd never be able to drive through there.

But huzzah! As expected, the kioti specs must be on the tallest R1 tires. And R4s laden with a backhoe come in much lower, just under 91" to top of ROPS. 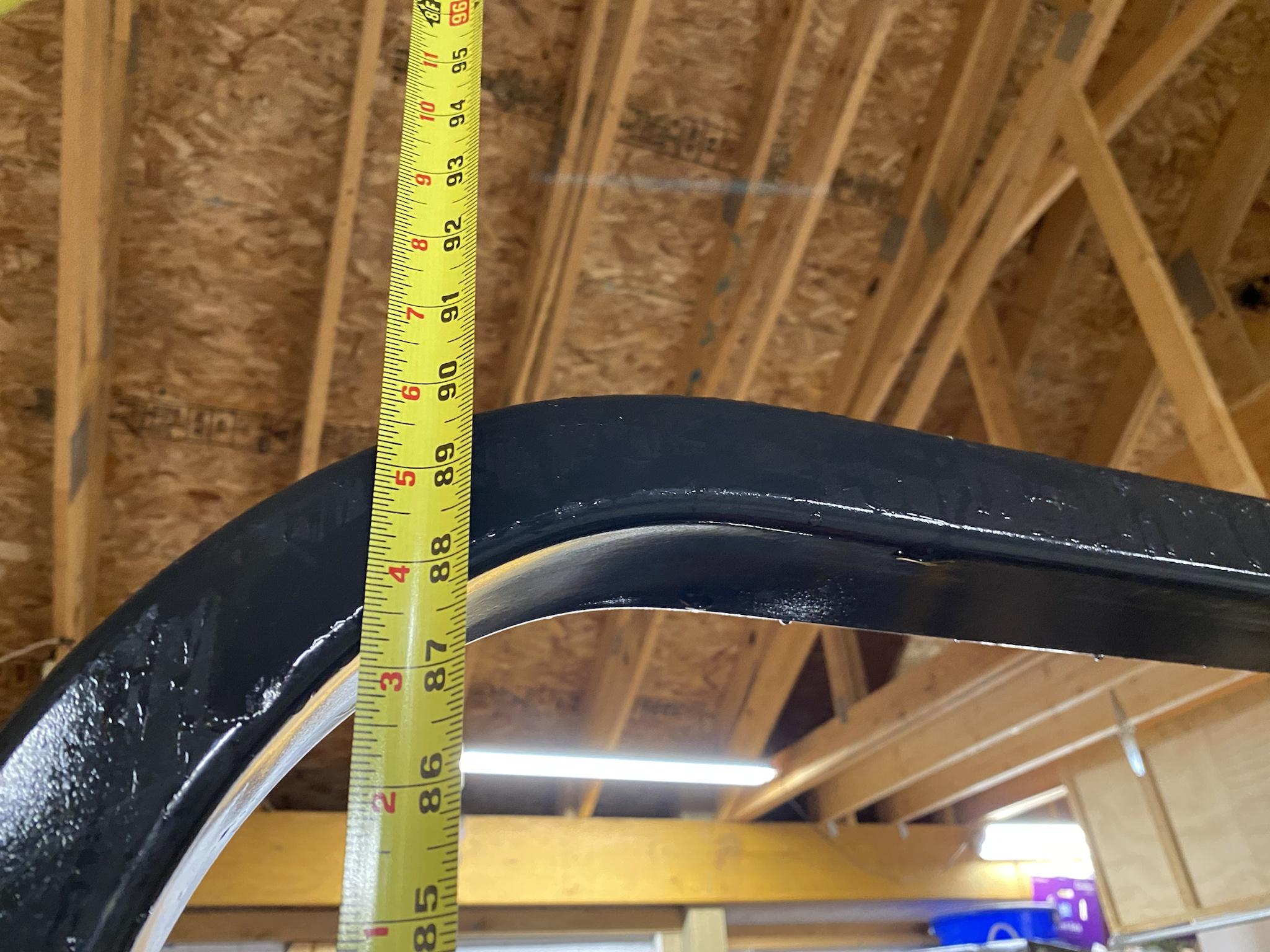 And then for my grapple. Clearly labeled EA, but I didn't find a part number yet. Is this just the standard wicked 55" model? So like, ~245 lbs weight? Would y'all reccommend better securing the hydraulic hoses? Again, apologies to all the folks waiting 6+months to get their orders filled right now... instant gratification for me lol. 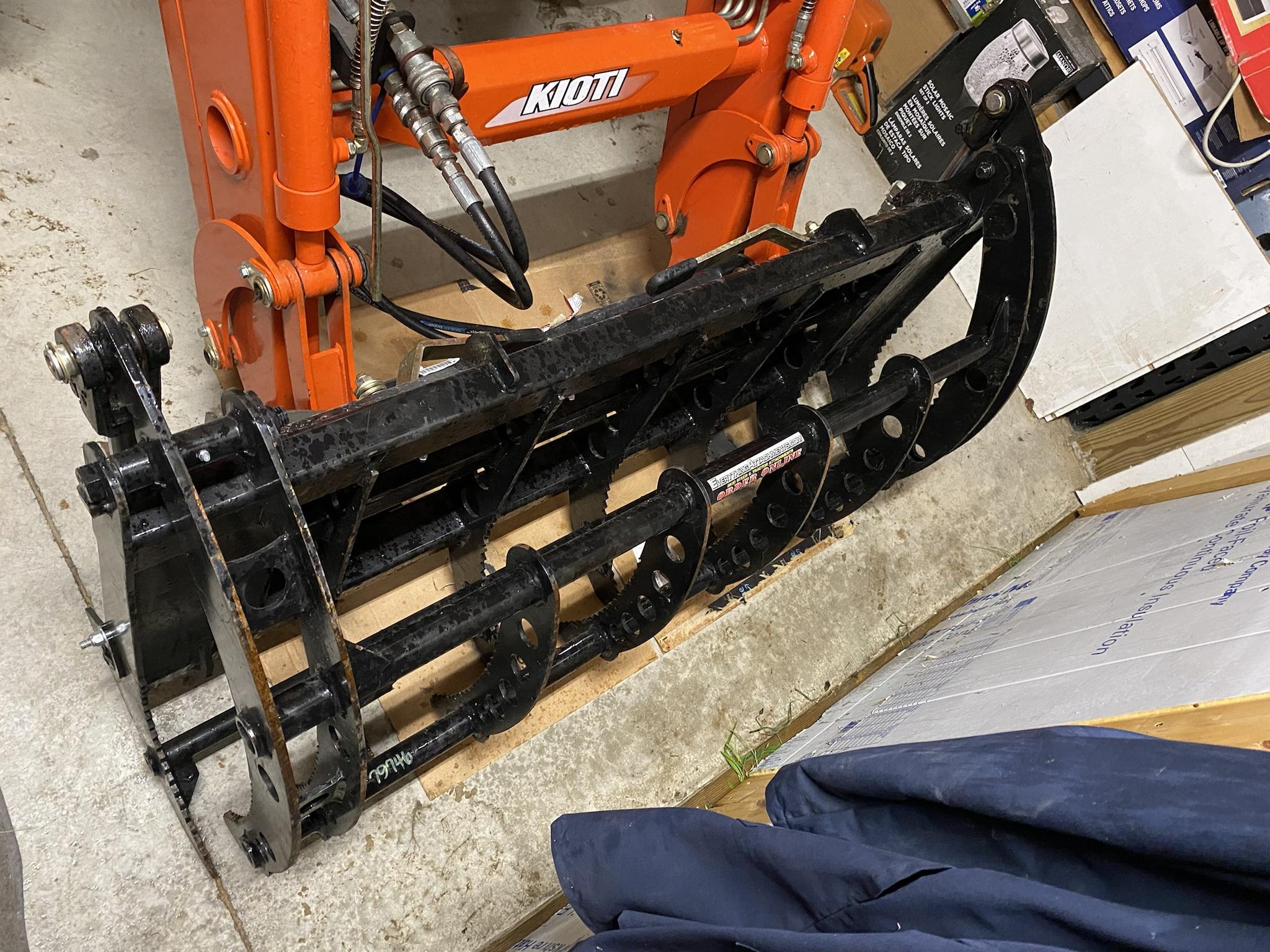 Yes looks like a Wicked 55". I use a cheap bungie cord to hold the hoses up that I connect to the loader tube (cross bar that says Kioti in your pic). The bungie keeps them out of the way but if they get caught it will stretch / break before the hoses so I kind of see it as a fuse.
Aug 25, 2021 #17
OP

Great story and happy to see you got a really impressive set up. All the bells and whistles!

BTW - my trailer has ramps too with braces on them that prevent the equipment from teetering the truck and trailer. If it didn't. I would put small trailer jacks on both sides at the back (removable maybe?) that could serve the purpose. A secondary purpose would allow you to store the trailer with the weight off of the tires. Not my idea, I think I've seen a member here do that.

Yeah i need to figure something out for that. I was thinking I can just bring my own harbor freight 3-ton jack stands along. But some swivel jacks mounted on the trailer itself might be kind of slick. I dont mind if the trailer tail drops a couple inches when unloading, but 5+ inches is alarming and it gets sketchy if the truck rear axle unloads significantly.

Edit: Might grab a pair of these to bolt onto the rear:

Yeah Jay, I wasn't sure which forum to post in... I was buying it, but that only lasted for one day lol.