My 3 girls again.
Old girl in front. Brat in the middle & Brats mother in back.
Brats nick name (among others is Doctor.) Brat will have nothing to do with anyone but me. Will not even get close if someone is near me.
Were it not for that I think she could be trained to find cancer in other people. At times she will find little sores, scabs or joints with arthritis.
The sores she licks & chews on. Same with scabs. The bad joints licks & gently bites. She has found & removed a couple of warts.

Those old-Gale's remind me of the ones a homeowner once had I did some trim work for, They were 4 LARGE old Golden labs, Very friendly but lazy and insisted to lay in the path of where I need to walk/work,:laughing: each had to weigh close to 100 lbs,

Needless to say they didn't move around much, maybe 5-10 ft at a time and lay back down,
for an example: I could drag an air hose over the top of them and they didn't care, even the sound of the nail-gun going off didn't make them flinch, Heck at one point I had to straddle the step ladder over one because he wouldn't move,

We had a time trying to get anything done keeping not to trip over them, The owner showed us how he could put a treat on the snout of one and it would let it lay there until he give the command, ( you c'n have it ) he said, the lab would then flip it into the air and catch it as it come back down,
He could also tell it to share with one of the others and he would flip it over to the other dog and it would catch it,
Seem like the Ol-labs come to life when it was time to perform tricks, wasn't much play left in them but they would still respond to his commands,
Jun 9, 2013 / Dog pics #713
J

Here are my three. We had five a few years ago but have lost the two males.

sixdogs said:
What kind of dogs are the last two photos?
Click to expand...

This is Bryce at 8 1/2 weeks. We got him to fill the void after we "lost" Dylan in January. 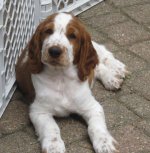 I hope you're ready for a lot of exercise! Bryce is beautiful.

Springer are active aren't they?? 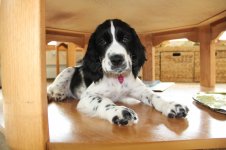 Pixguy said:
I hope you're ready for a lot of exercise! Bryce is beautiful.

Springer are active aren't they??

The Welsh are supposed to be more docile than the English but you sure couldn't prove it by this one. Two position switch: OFF or FULL ON!