My father has fallen and can't get up

Here is some floor heating items, they have installation instructions
https://www.supplyhouse.com/sh/control/search/~SEARCH_STRING=electric floor heat
Nov 13, 2022 / My father has fallen and can't get up #22
2

Stay safe. Wouldn't be good for you to get over tired and have an accident that sets you and the entire situation backwards.

You could use a sliding barn door on the accessible outer wall of the bath instead of pocket doors that would make the framing easier and avoid having the pocket door hardware buried in the wall. However, pocket doors would preserve the free wall space in the rooms if you need that space for furniture placement, etc.

When framing, I've read the suggestion of using 3/4 plywood as sheating on the interior studs to make it easier to install handrails at the finish stage. However, I tend to think the better plan would be to use 2x8 blocking so you have an extra wide blocking surface.
Nov 13, 2022 / My father has fallen and can't get up #23

And I've been dealing with Supply House for about a decade, always prompt, correct and quick shipments. Usually the best price I could find on the web or local. I usually let my order build to above the minimum for free shipping.
Nov 13, 2022 / My father has fallen and can't get up #24
OP
F

Thank you for that. What components would I need? Just the spool of wire and a thermostat? Is it that simple?
Nov 13, 2022 / My father has fallen and can't get up #25

Yes, insulation will be under the concrete as well.
Click to expand...

I went through something similar when wife broke her ankle and had on top of that a bad knee. She went into nursing home for 6 weeks while I was setting up a bathroom downstairs in one of the rooms. Installed a large shower with low sills for access and with room for support chair to transfer from wheel chair to shower and installed counter at hight that works for sitting down access from wheelchair. Installed a number of hand supports in strategic locations. Also installed electric heater in the ceiling on a timer to boost up in the mornings. Works really well and is only on for short period of time. The pluming was tied together in the basement so no digging involved.
She now has her knee replacement behind her and she is back to walking again but she likes her downstairs living and don't feel safe on stairs any more.
Nov 13, 2022 / My father has fallen and can't get up #26

Sorry to hear about your dad. I'm praying for a quick and easy recovery.

I do quite a few ADA showers in the remodels that I do for clients. From what you have said, it sounds like you have a solid plan. Some of my clients what to use chairs that they can remove, others want something built into the shower. Just be sure to block the framing for grab bars everywhere. I've put them vertical on either side of the shower handle, so they are right in front, and I've put them horizontal all the way around the shower. I would buy them now, so you know where to put your blocking when you are framing. I found the best options on Amazon, but the box stores have plenty to chose from. Some people are particular on how thick they are, so be sure to have them grip it before you install it.

Plan on two shower valves. One for the regular shower head and the other for the flexible shower head. A few people have done the combo units, but nobody likes them. Be sure to put the valve and handles where they can be reached without having to get wet.

There is no reason for a glass door on a walk in, ADA shower. It's just something extra to clean that costs a bunch of money.

Here are a few pictures of a bathroom that I finished last week. It had a bathtub in it that she was afraid to use. She is elderly and she was afraid of tripping over the tub, so she used the hall bathroom instead of this one. I'm not a fan of the shower head, but it's what she wanted. Same thing with the 12x24 fake marble wall tile. It's all the fashion right now, so I'm doing a lot of it, or white subway. Seems that's what everyone wants right now. The inside of the shower is 3 1/2 inches by 7 feet. In my opinion, this is just about the perfect size for a shower. Most of my clients want the little corner seat on the other side, farther away from the shower head. It's where the ladies put their feet when shaving. My wife uses ours to store towels. 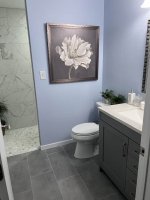 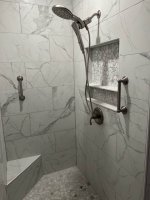 Here is a built in seat that they wanted because of knee surgeries. They wanted two valves for the rain head, and then the hand held shower. 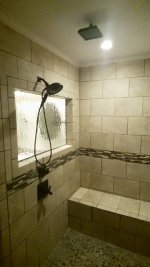 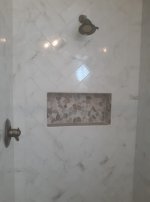 This client has a collection of at least 20 different shower heads. He's sort of crazy on finding the right one!!! He also wanted lots of options while taking a shower. 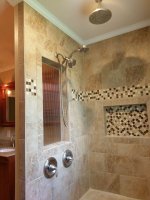 fatjay said:
Thank you for that. What components would I need? Just the spool of wire and a thermostat? Is it that simple?
Click to expand...

Almost, most systems use a slightly special thermostat and a sensor embedded in the floor.
Some systems will recommend a spare sensor be embedded or the sensor may be inserted in a sleeve that exits the floor pour
so it can be replaced if it fails. Often a relay is required between the T-stat and the heater for the current being controled. Some will use a bit of liquid tite or PVC conduit for the power wires leaving the grid.
Nov 13, 2022 / My father has fallen and can't get up #28
H

You are an excellent son and I am sure your father is very proud of you, as he should be. You should also be proud of yourself for stepping up to take on such a large project to help out your parents. Especially given your other commitments in life.
Nov 13, 2022 / My father has fallen and can't get up #29
C

Here is a link to a flooring backer system for tile. I have been on jobs where ths was done and I have a similar brand on my bathroom and entry tile areas. Works great. Also have a walkin shower with no treshold and 36" door ways. Was able to learn from elders when we built our retirement home 4 years ago. Plan on going out in wood boxes, or at least covered gurney. Jon 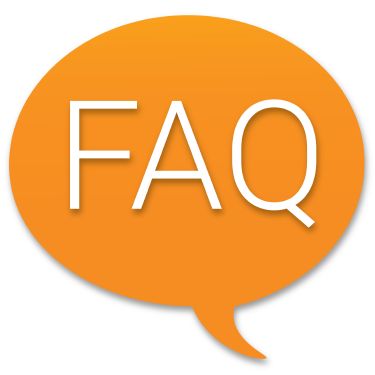 Why should I use Schluter®-DITRA in my tile installation? | Schluter 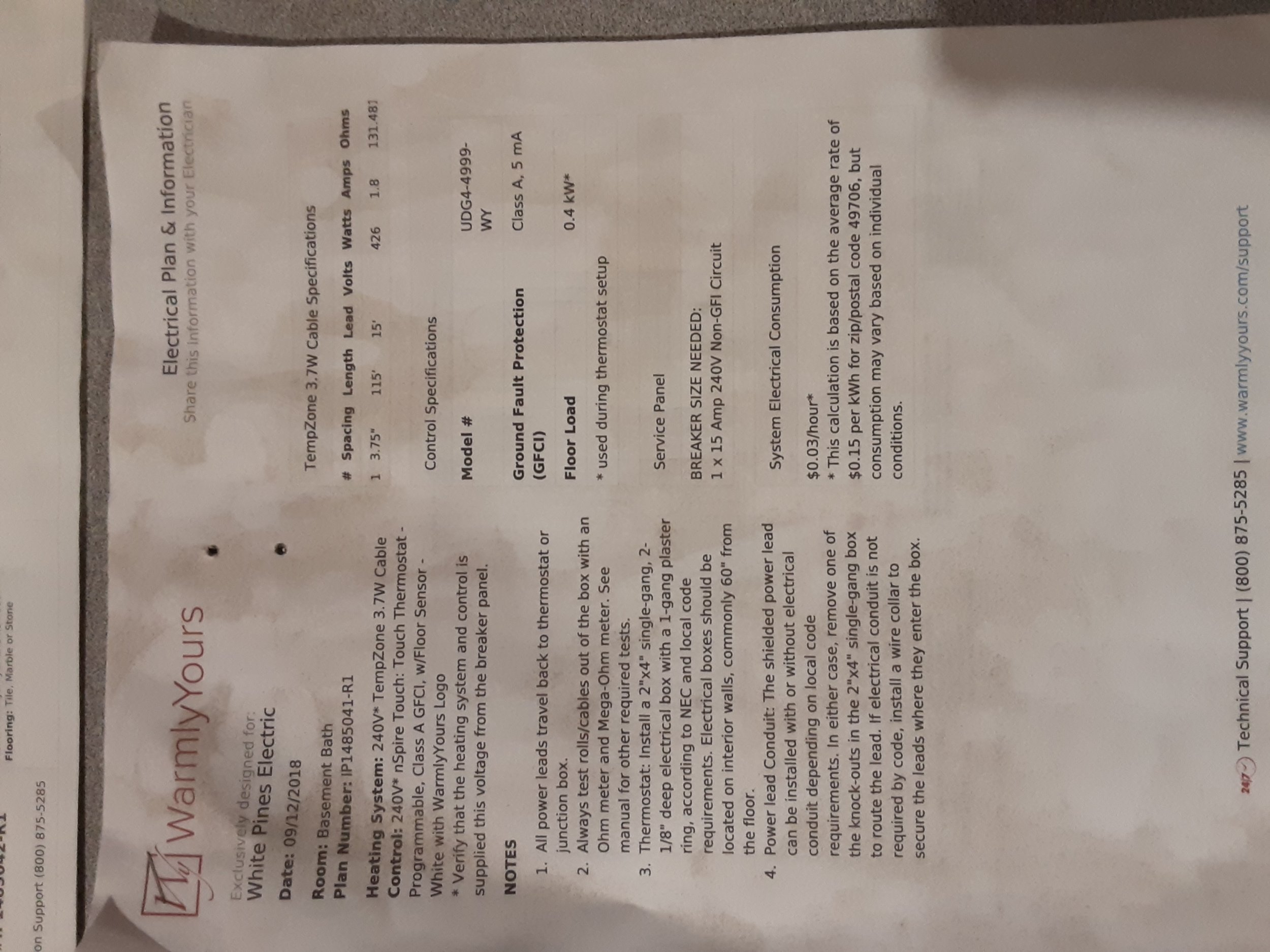 Found our paperwork for the entry way heated tile floor. 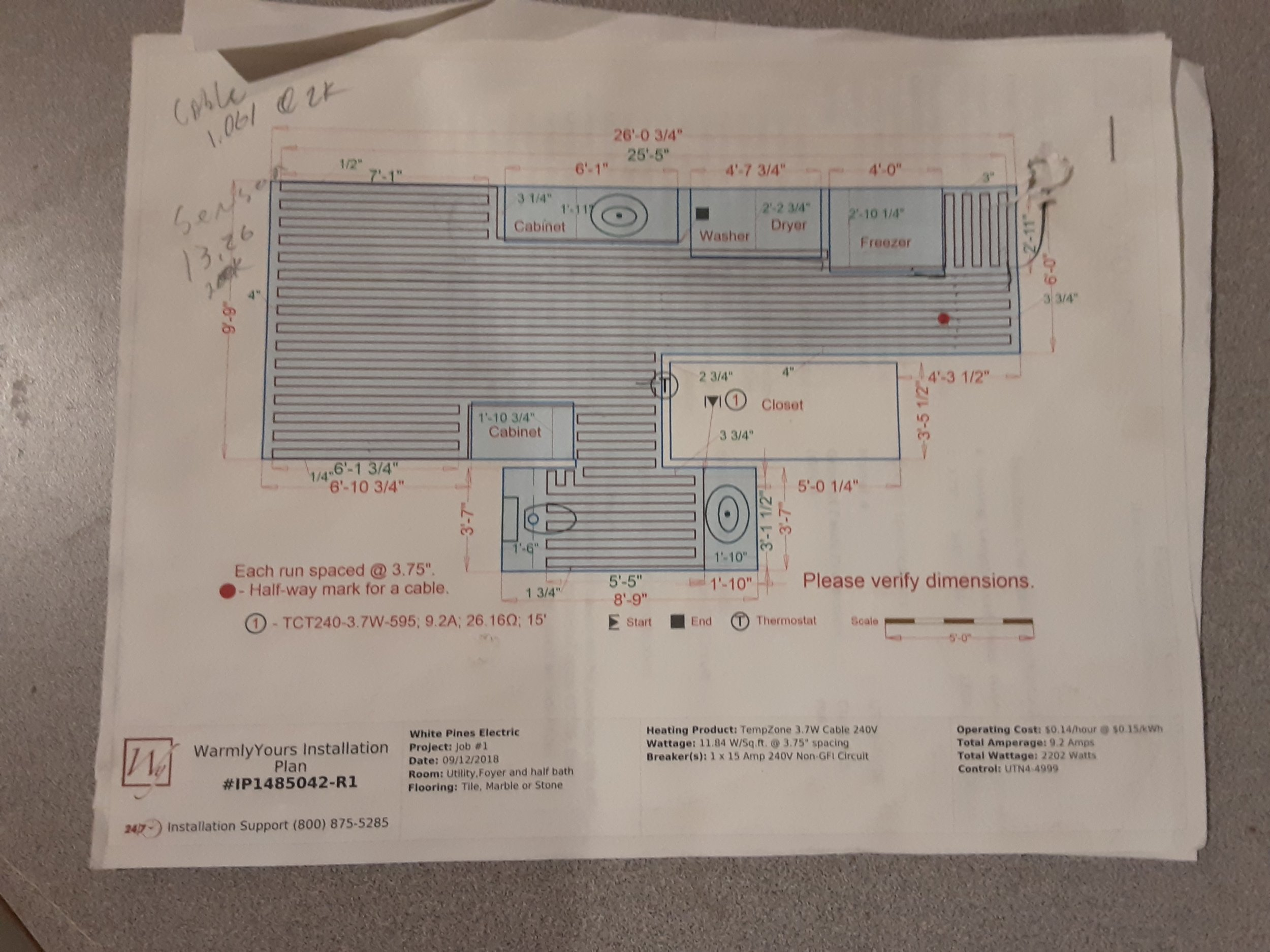