Hi' a couple of year ago I needed post hole digger for my tractor, Bought a cheap used one that was laying berried in the grass covered in mud all the oil had run out through the breather in short just dumped behind a shed left to rot, The support frame faired better as it was occasionally used as a lifting jib and stored in the shed.

These post hole diggers are heavy and awkward to fit on your own especially at near on 70 years old with a stuffed shoulder, after cleaning replacing bearings and a couple of seals put it to work, then had the task of removing it and storing it , laying it on the ground in my shed
takes up space and is just as heavy and awkward. So I built a frame with a three point pick up on the back that holds the post hole digger securely upright with the frame still attached just need to reverse in to the frame lock the auger shaft in to the frame then disconnect the drive then lower the frame remove the pins and that's it, the frame has facilities for two more augers, a spud bar narrow clean out shovel an axe, it's on wheels so can be moved around the shed if I need the space.
I had intended on making a wire spinner on the back as it would keep all the fencing gear together on the tractor so it could all be taken to the job site on the one frame, see the photos how it all works, probably better than I can describe it.
Right now it's for sale as I can no longer physically operate the tractor, that's the reason I have the photos, for the listing.
Regard's. 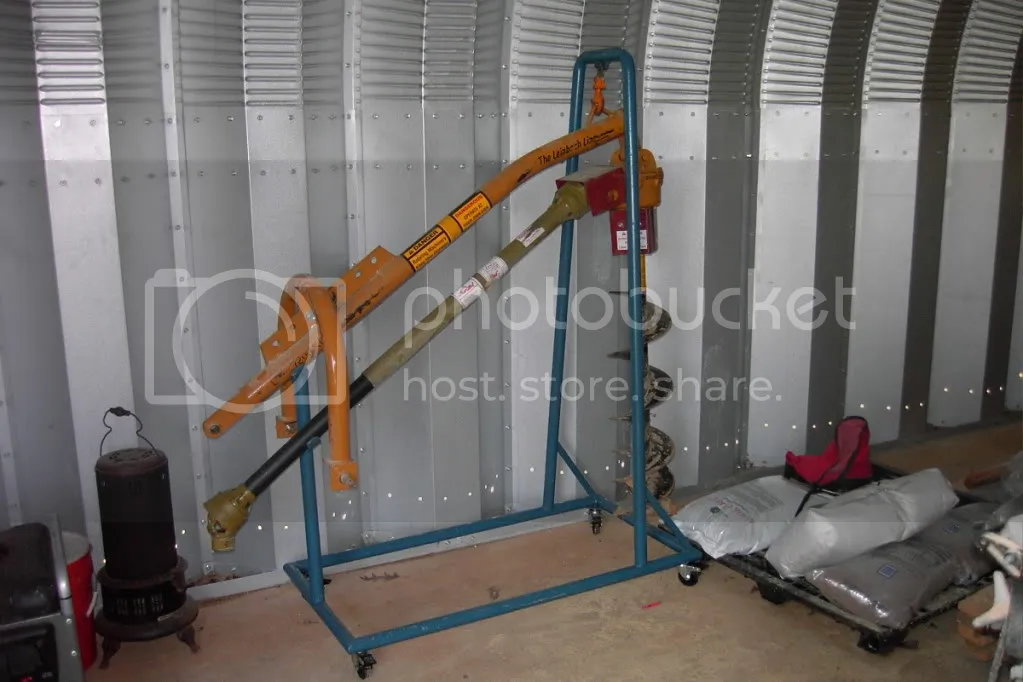 HI' working a property on your own is hard enough when you are young and fit, I thought nothing of it, did what needed doing easily and enjoyed it, then age and old injuries catch up, things start to take much longer, I have all ways looked after my machines, storing them safely under cover out of the way, Post hole diggers are one of the least maintained often abused items on a farm left to rot away as I found when looking for a used one.

Many years ago on a neighboring farm a worker was killed by the drive shaft breaking loose up near the gearbox
the CV joint,the needle bearings were rusted, the whole joint along with sliding shaft came apart and hit the worker standing 10 feet away breaking his neck from behind. This post hole digger was lying on the ground out in the open for many years.
It's a wonder why Caddies are not made or sold as accessories for new machines surely just for the maintenance and storage aspect there is a need not to mention saving back injuries.
Regard's
You must log in or register to reply here.
Share:
Facebook Twitter Reddit Pinterest Tumblr WhatsApp Email Share Link