why so many jeeps now on road?

rScotty said:
I drove from Colorado to Cape Cod via the southern route this last year and was astonished at the number of Jeeps I saw. On the East Coast, all though the Carolinas, Tenn., and southern states and even up in downtown Boston. All those businessmen driving Jeeps on the highway seemed like some sort of sci-fi movie.

Jeeps aren't as popular here in the Rocky Mountains.
Instead, out here in the rural West where one might expect to see a lot of Jeeps you see mostly Japanese 4WDs - both trucks and cars.
rScotty
Click to expand...

We rented a Jeep gladiator truck last summer for the of roading part of our vacation in Utah. It was definitely more roomy than my little Wrangler Rubicon. We also had a nice big mini van for road excursions (can one say that? ”nice big mini van”?)
Saw a lot of them and of course fill size 4x4 trucks.
Nov 20, 2021 #22

Mechanically, Jeeps are just incredible. They can take you places that most other vehicles cannot imagine.
In reality, most people use them as mall crawlers. So the brilliance of the machine is lost on those who never use it as such.

Unmolested, they are fine. For others who look at it as a Leggo set, it becomes complicated if you don't do your research first.
And that is a very common tail and why they get such a bad rap.
As for gas mileage, yes they suck. No other manufacturer has challenged them to do better so I guess they don't or can't.

My 2013 engine was designed for a small sports car (FIAT). It has decent power but it doesn't come to life until 3000 RPMs. Seems like an odd fit and it is an odd fit. Once you understand that it likes to run at higher RPMs, it is fun to drive.

Electronically, it is kind of a mess. People who want to modify it often screw it up then blame it on the vehicle. The radio and functionality work fine until you try to modify it. For most, it's better to leave it alone or gut it all and replace it. Pro installers don't mix and match because the electronics are finicky but the new owner who wants a bigger amp doesn't know that.

I bought mine used and it had multiple engine light issues. (Thus a good price)
Anti-skid light- steering wheel was off center, adjusted the nut under the front axle and light went out.
Engine light- replaced the thermostat and gas cap.
Engine light- removed the K&N filter sprayed with oil. Oil droplets were coating the map sensor several inches away in the cold air intake.
That was 40k ago and running fine so far.

The price to purchase is insane. Makes no sense but it has been that way for decades. So it hurts when you buy it but it holds its value.
Had a 2002 Wrangler with 110k, totaled (T-boned on front axle) fixed, and still got almost half what I paid for it 6 years later.
Nov 20, 2021 #23

Good thoughts Root Cause.
I swore I would leave mine alone and so far I have. I did add a 10,000lb front winch to get things unstuck and some LED cube lights. Looks completely factory. I won’t touch the drivetrain. The thing will go anywhere stock, so why bother.
My son wants to go one size bigger on tires and a 2” lift. So far I have succeeded in keeping that at bay, but once these tires wear out, I think he will push me over the edge. I do agree they look fantastic with 35’s and a mild lift.
Nov 20, 2021 #24

ultrarunner said:
Many new around here too..

Jeep had some real deals on price and finance...

Also inventory to move and then the coolness factor...

The newest one is a fully optioned Rubicon... She said it's a gift to herself.... she doesn't drive it everyday on her 120 commute... her old reliable KIA gets better mileage...
Click to expand...

You just said it.

Jeep to me is just like Westinghouse or bell and Howell etc, an old trusted name that they can exploit.

Who owns the jeep name now, Chrysler? Who owns Chrysler..

My entire life I've read all about cars and consumer reports etc and in the past, jeeps have always had terrible ratings.

If Jeep’s are a fad, the fad has been going on for 50 years.
Weve owned Jeep’s since the early 80’s and the amount of people at the Jamborees and get togethers is insane.
I think the fad has gone into warp drive because they have made the Jeep a much more civilized product while actually increasing capabilities. They are also offering more variants and styles to fit people’s needs than ever.
Nov 20, 2021 #26

My son really likes his pickup, diesel model. Then he added 37's and oem lift kit. 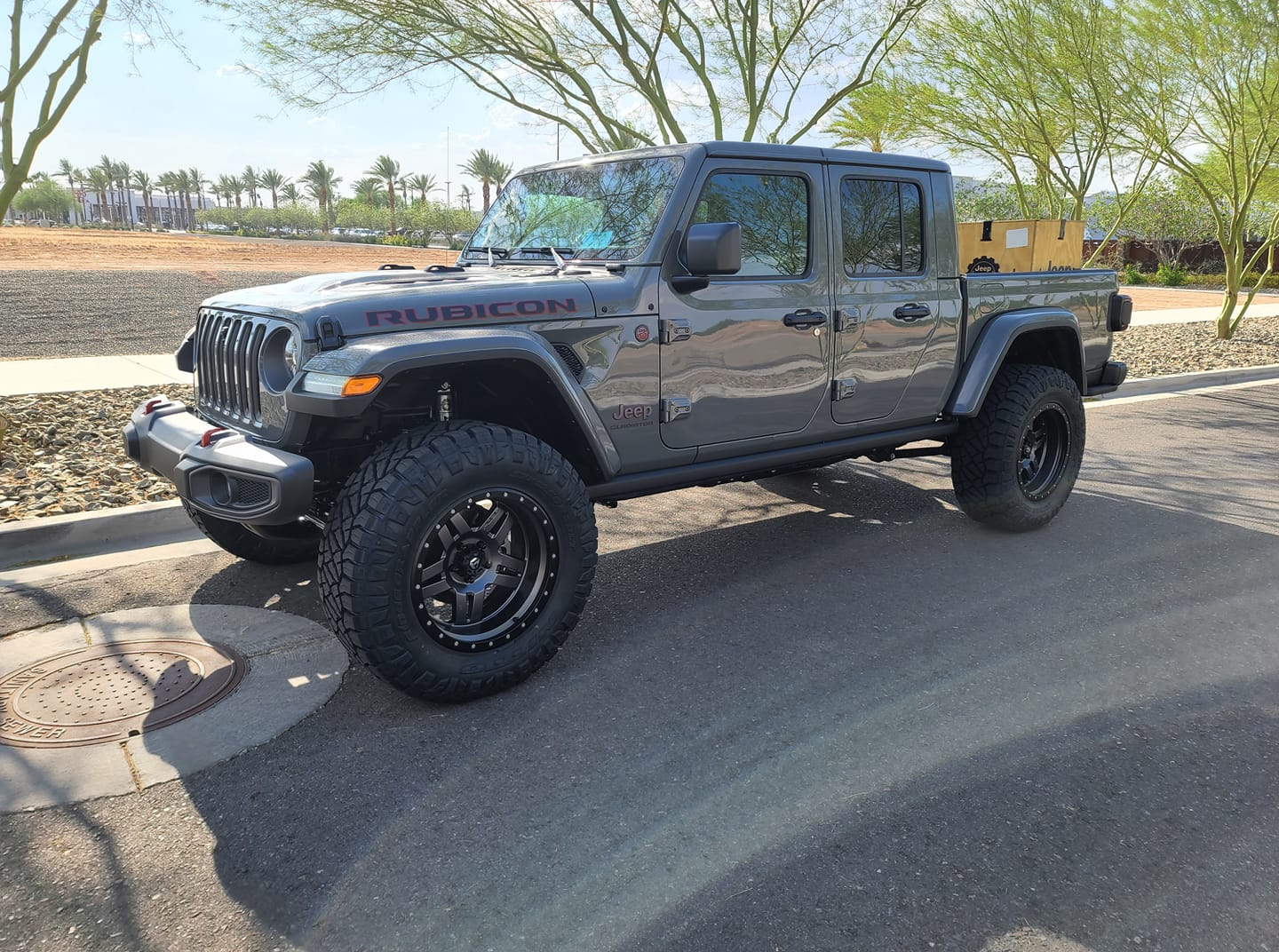 Hay Dude said:
Good thoughts Root Cause.
I swore I would leave mine alone and so far I have. I did add a 10,000lb front winch to get things unstuck and some LED cube lights. Looks completely factory. I won’t touch the drivetrain. The thing will go anywhere stock, so why bother.
My son wants to go one size bigger on tires and a 2” lift. So far I have succeeded in keeping that at bay, but once these tires wear out, I think he will push me over the edge. I do agree they look fantastic with 35’s and a mild lift.
Click to expand...

Keep this guy's email. He will sell what you need not a kit with stuff you don't need for a 2-inch lift. [email protected]
Good guy, very knowledgeable. Tell him about the winch, that will change what springs you need to absorb that additional weight bouncing on the nose.
Nov 20, 2021 #28
O

Jstpssng said:
I agree 100%. The old pickups were versatile work horses, now they're a status symbol which doesn't deserve the name "Willys".
A coworker is a jeep fan from way back, but this time he went with a Toyota because he got tired of the repairs on his last 2 Wranglers.
Click to expand...

Yeah, good luck with that. Had a turdra for a company truck at my last job, biggest POC that ever darkened my driveway. I see them as suburbanite trucks so some guy with a shirt-and-tie job can look tuff and macho at the country club. Not a snowball's chance I'd ever even consider another one.
That having been said, for some reason they seem to be quite popular in Vt. Not sure why.

jyoutz said:
I’m on my third Jeep. The first one I sold still running great with 273k miles. The second I gave to my son with 216k miles and he drove it another 60k before trading it in. My current Jeep has 130k miles (just getting broken in). I have never had any serious repair issues: just maintenance items like brakes and an occasional water pump.
Click to expand...

I'm on my 2nd (3rd if you count the one my wife had when we first met). All were/are excellent, relatively trouble free vehicles. All were Cherokees or Grand Cherokees, no experience with the Wrangler (or whatever the "mailman" Jeep is called).
I will admit that the truck is not my cup of tea.
Nov 20, 2021 #29

What I've learned is don't follow one around a corner. Their drivers seem to be afraid of rolling over and slow down to the point of dragging a large line of normal cars down in speed. Unfortunately, they go 65 in the high speed lane on an expressway and 80+ in the right lane. But, very predictable....
Nov 20, 2021 #30
OP