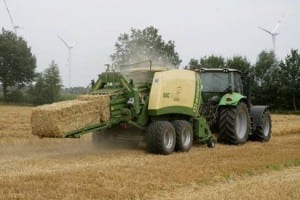 The BiG Pack 870 High Speed (HS) HDP is the newest large square baler with Krone’s unique MultiBale technology. The baler produces 2’7” x 2’3” bales with the ability to tie up to eight small bales within one large bale.

The BiG Pack 870 HS HDP has been engineered for producers searching for the capacity and efficiency of a large square baler, while offering a product that may replace small square balers and the associated small square bale handling systems.

“The BiG Pack 870 HS HDP is an extremely versatile baler,” said Cliff Addison, Krone Product Development Manager. “It combines a high density, 3’x2’ large bale with the MultiBale function. This allows the operator the flexibility to choose to tie either one large bale, or up to eight small MultiBales within one large square bale.”

The baler achieves up to 25% higher bale density with HDP technology compared to a standard large square baler, boosting transport efficiency and allowing the storage of more crop in less space. In addition, heavier bales result in fewer bales in the field and less handling time, decreasing fuel and labor costs.

“With its unique dimensions, the BiG Pack 870 HS HDP allows the end user to store approximately 30% more material in a space only 4″ higher than a typical stack of 3×3 bales,” Addison said. “Each bale weighs approximately 97% of a standard BiG Pack 3×3 bale. Typical MultiBales weigh approximately 80-90 pounds in alfalfa and grass mixed hay, dependent on the baler settings.”

The BiG Pack 870 HS HDP uses Krone’s proven double knotter technology. Equipped with a total of five double knotters, two knotters are used to tie individual MultiBales and the additional three knotters tie the MultiBales into one large bale. The MultiBale function can be turned off so that traditional large square bales are made and tied using all five knotters.

The small MultiBales packaged within the large bale are easily separated. By cutting the three strings holding the large bale together, the individual bales become accessible to feed or be used as bedding.