Crazy to see the cab off for the headstuds

Couple of pictures under hood on my truck. Seem's like quite a bit of room. They may be upside down 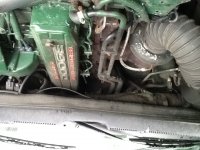 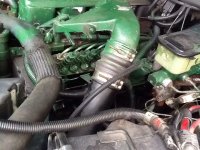 Tractor
Which One do you want to know about?

JLwoodworks said:
Crazy to see the cab off for the headstuds

I had a similar experience.
Travis 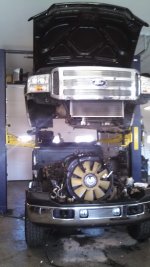 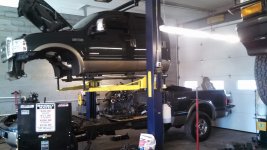 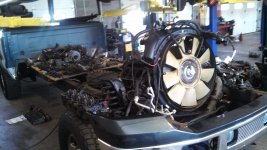 Wow. Looks like you guys have had to do some serious work to keep those on the road. Was that covered under warranty? Did you get rid of the truck after that experience?
Aug 7, 2014 / 6.0 Power Stroke Questions #26

Tractor
Which One do you want to know about?

roadhunter said:
Did you get rid of the truck after that experience?
Click to expand...

The side of my truck has something that resembles this on it now.
Travis 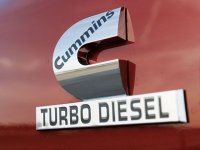 EverythingAttachments said:
The side of my truck has something that resembles this on it now.
Travis

I don't know alot about tractors. I love to give back on the forums, but since I don't know alot, I'm not able to do so. Here's a good chance for me. I'm a diesel mechanic. You can walk in my shop any day of the week and find a Ford, 03 through nearly current with the cab in the air. Alot of what has been said here is very true. I won't touch on every post, theres too many. To the last post above mine, I'm sorry, you got ripped. I can get to every fuel line on the truck, easily, without pulling the cab. Without pulling much of anything for that matter. The only thing that comes to mind is possibly an oil line (or pipe/fitting, if they changed the wording for the sake of simplicity), which is a little more extensive, but still far from pulling the cab. The only reason to pull the cab on a 6 liter is to do head studs or gaskets (which should automatically include studs, never bolts). The only reason on a 6.4 is the same reasons plus injection pump.

Someone mentioned on a previous page to get a scan gauge to monitor the difference between oil and coolant temp. Very good point! This tells you if there is a blockage or failing cooler since oil and egr coolers both use coolant and are directly in line with one another. But an easier way is to update the calibration in the PCM. Take it to a trusted shop or dealership and have it reflashed. Ford got smart and incorporated a new strategy that now monitors this for you, and turns on either the check engine light, or a wrench light on models that are equipped.

Which brings up the next point. Two things were mentioned. Drive it like you stole it, and the cycling duramax vanes at idle. These both produce the same results, keeping the carbon from building up inside the turbo. When you get the new calibration in your PCM, problem solved, it will have this same feature.

Drive it like you stole it can be good, but can also be bad. If you have anything newer than a very early 04 model, you run the risk of blowing the STC fitting or stand pipe orings, very expensive fix and leaves you stranded. Someone mentioned bulletproofing your motor. These also have to be replaced to be considered bulletproofed. VERY common failure

Theres plenty more but I'm rambling. The last thing I'll mention is the oil filters. You have two options, NEVER mix the two. One or the other. Either use a factory filter which REUSES the original cap, or an aftermarket filter which may or may not reuse the factory cap. You must know which one you have. If in doubt, either purchase an aftermarket with a new cap, or a factory filter AND a cap. Its not that the aftermarkets just changed the height of the filter, its that at some point, someone put a filter in that came attached to a cap, then someone else didn't know better and yanked that "taller" filter out of its cap and shoved a stand-alone filter back into the "un-reusable" cap and screwed it back in. Doesn't work. Usually creates a no start. Ultimately, the best idea is stick with motorcraft, and a factory cap. Yes its more expensive, but I get trucks wreckered in every day for a no start and the wrecker bill is way more than the filter would have been in the first place.

Sorry for the rant. Just food for thought for you 6 point Oh No owners out there.