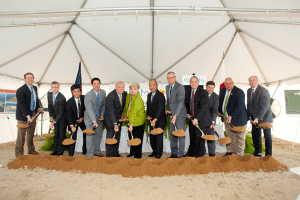 Kubota Manufacturing of America Corporation (KMA) today announced the groundbreaking of its 502,000 square-foot manufacturing facility at Gateway Industrial Centre, in Gainesville-Hall County. With a goal to begin mass production in spring of 2017, the new plant will be positioned on 180 acres of land, three miles from KMA’s existing facilities. The plant will manufacture Kubota’s RTV series utility vehicles, with the capacity to produce 50,000 units annually.

“This is an exciting day for Kubota,” said Mr. Hironobu Kubota, President of KMA. “As the demand for Kubota products continue to grow in the U.S., our Georgia facilities will be well-positioned to meet our customers’ needs now and well into the future.”

KMA estimates that this expansion will allow the company to increase production capacity by 60 percent over the next five years. The existing KMA facility, which has been in operation since 1988 and employs approximately 1,300 people, will also undergo enhancements to increase its production capacity to support Kubota’s growing turf business.

“Kubota’s continued investments in Georgia make it one of our state’s greatest business success stories,” said Lt. Governor Casey Cagle at today’s groundbreaking ceremony, which was attended by state and local officials along with Kubota executives and employees. “Today’s groundbreaking is a testament to the company’s commitment to continue strengthening the state’s manufacturing base and creating future job growth. We thank Kubota for believing in the potential of our state and investing in the future of our residents.”

As the company continues on a high-growth trajectory, Kubota maintains its commitment to support its expanded product offerings, with operational excellence as a priority. “Increasing the capacity of our manufacturing operations in Georgia will enable us to achieve even greater operational efficiencies to make Kubota’s business stronger and more competitive,” Mr. Hironobu Kubota continued.

Kubota has been doing business in the state of Georgia for more than 40 years, with its first operations located in Norcross. In the mid-1980s, Kubota purchased its first office building in the state at the current Kubota Tractor Corporation Southeast Division headquarters in Suwanee. Since that time, Kubota has further expanded its operations in Georgia to include KMA in Gainesville; its National Distribution Center (NDC) in Jefferson; and Kubota Industrial Equipment (KIE), also in Jefferson, which produces Kubota implements, including loaders and backhoes. Kubota Tractor Corporation, Kubota Manufacturing of America and Kubota Industrial Equipment are all U.S. subsidiaries of Kubota Corporation, based in Osaka, Japan.