How is this possible?

Maybe somebody ran into the back of the trailer?

jwstewar said:
If that were the case, why is the cab all jacked up in the rear? If it were just the bed, the cab would still be level and you could see the frame under the bed.

But to Eddie's point, I saw that and was scratching my head. I would have thought the extender used on the hitch would have given way long before the frame of the truck. We have friends that have a similar set-up, except a SRW 350. They have the truck camper that sticks out, use a 4' hitch extension, and tow a small stock trailer with Nigerian Dwarf goats. Not all that heavy and it scares me because of the extension.
Click to expand...

At closer look, it does look bent frame is the problem, but I have no idea how that could happen. I have loaded 1/2 ton trucks so heavy that the front steering is light and never bent a frame. I can lift the rear of my truck off the ground loading my TLB on the trailer and not hurt the frame on my Chevy Z71. I can only think that the frame must have been weakened somehow by rust or something the owner did to it to mount the camper. That looks like a standard cabover camper so that should not have an impact on the truck frame.
The springs should have collapsed and bumper dragged the ground prior to frame breaking.
Sep 25, 2019 #23

deerefan said:
Maybe somebody ran into the back of the trailer?

Unless photoshopped, pretty much makes all the jokes about Ford’s true
Sep 25, 2019 #25

Like someone else said, the trailer is towed off the camper and it just levered up so hard it bent/broke the frame.
Sep 25, 2019 #27

dodge man said:
Like someone else said, the trailer is towed off the camper and it just levered up so hard it bent/broke the frame.
Click to expand...

I have a friend who trains bird (duck) dogs. He has a special stainless box built for the back of his 1 ton that can hold a dozen dogs, water, food, and all the other supplies he needs. He travels all over the country so it also has a place for him to sleep in it. It's heavy enough so it has to go on a dually. I can't remember which brand it was at the time but about a year after he bought it the dealer had to do warranty work on it. When they lifted it up they bent the frame just like that because they placed the lift arm further forward of the axle. They were upset at what had happened and called him into the shop to see the damage while on the lift (he was waiting for the work to get done). He said when they put it back on the ground it mostly straightened back out. He actually wanted to take it home while the dealership dealt with their insurance to get him a new truck but there was no way the dealer let that truck go anywhere.

My guess is, if real, is it had previous damage that the owner didn't see or didn't think was bad. He possibly hit a big bump and it gave out. Not knowing what's in that box on his bed it's hard to say how much and where the weight is.
Sep 25, 2019 #29

dodge man said:
Like someone else said, the trailer is towed off the camper and it just levered up so hard it bent/broke the frame.
Click to expand...

The trailer isn’t connected to the camper. The only thing holding the camper on is four connectors on each corner, clearly visible in this picture. People extend the hitch off the truck if they pull something. You can see here the trailer is attached to the hitch. 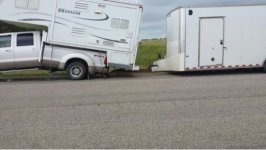 RNeumann said:
Only took 21 posts to get here! This didn稚 occur while he was simply driving down the road.
Click to expand...

My thinking as well. This was a loading/shock loading issue. Maybe trailer tongue weight and camper weight distribution could have contributed, but my guess was he was rear-ended and the forces applied a shock to the frame. We can't see the rear part of the trailer so its all speculation.